Elon Musk, a man for whom I have enormous respect, is warning us all about the dangers of Artificial Intelligence saying it'sthe biggest risk we face as a civilization. Although novels, Isaac Asimov issued similar warnings with his stories. Look at 2001 with the AI there. Just because they are fiction does not mean it couldn't happen. Through AI people would lose jobs and in the end it would be the AIs which make critical decisions for the human race. If any were left that is. If Elon Musk thinks we are running into problems, the world should listen.

As I told you, last night we went for supper at the Red Lobster. One of the waitresses was chatting to a couple behind me and her conversation was littered with the word 'like" There are so many people who cannot talk without constantly using that word. For others it is the constant use of "you know". Why oh why doesn't someone tell them about what they are doing? It is dreadful to listen to, particularly when it happens on the media.

Creatures of the Photo Ark - photographer Joel Satore: this was a programme we watched on PBS on Tuesday night. Joel Sartore travels the world photographing rare animals which are on the brink of extinction and the collection is retained at his local zoo. This particular programme was a visit to Florida Keys and Madagascar. in Florida he particularly 'visited' the key deer which are a rare animal and only live in the Keys. 120 of them are killed on the roads every year. In Madagascar he photographed the most amazing chameleons some quite tiny and one as small as his thumbnail. Also lots of different lemurs.

It always annoys me when recipes call shrimp scampi. Scampi is a different type of shellfish albeit very similar but tasting different.

Best shrimp on the grill I have ever made! I served with lemon spaghetti and had grilled asparagus on the side. The intense garlic flavor really complimented the lemony flavor of the pasta 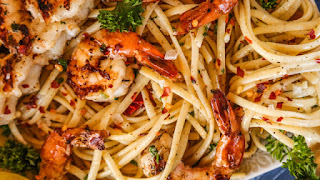 3. Thread thawed shrimp onto skewers and cover with marinade for 30 minutes.

5. Grill, brushing occasionally with extra marinade, for about 2 to 3 minutes on each side, or until done.