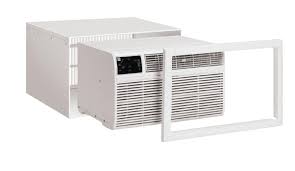 Hooray, we have air. Mind you it's almost like winter out there, but we have air if we want it. We are now as poor as church mice but we have air and of course brakes etc. on the car.. He had one heck of a job removing the old one and another heck of a job getting the new one into the sleeve, but eventually he managed it. Was supposed to have someone with him but who knows what happened to him. This picture basically shows you how they work. The sleeve is part of the apartment and the unit slides (joke) in. Mind you, if we ever decide to move, I have a feeling we won't be able to take the unit with us.

After lunch, we went bowling as usual. We ended up with lots of noisy kids. Never known the place to be so bad. We played two games and Matt groused all through them. So we went home. Pity, I was bowling really well. The young man in charge today, said he enjoys kids and gets on well with them, good for him. There was one couple, the youngest kid was kicking his brother and his brother ended up howling his eyes out. That same howler was making enough noise for 6 kids, didn't seem able to speak below a shout. Not only that, there were a whole bunch of women having a pot luck and then bowling. One of the winter leagues I think. In themselves not particularly noisy but it all added to the general noise level. Great for business, not for us.

Today is July 14 or in France Bastille Day le quatorze Juillet. a day of national celebration. I can't believe they invited Mr. Trump to join them even though he has run down France quite a lot. However, I guess he is the President.

Some people wouldn't go near this recipe because of the prunes, but although I haven't yet tried it, I think the combination would be excellent and give a good flavour to the pork.

Pork Tenderloin With Shallots and Prunes

Porc aux pruneaux, which is a classic, is by no means fancy, and it is always much more old-fashioned bistro or grandmotherly than high end. Simply put, it is a pork roast with red-wine-soused prunes. Hardly elegant, although it doesn’t have to be heavy either. In France, countless versions of the dish are made in neighborhood joints and at home. Sometimes a large loin or shoulder roast is used, sometimes pan-fried chops. Here we use a lightly brined pork tenderloin, adding stewed shallots to the sauce for depth and texture, and a touch of ginger for brightness. While the roast is in the oven, the shallots simmer with the wine and prunes for the sauce. The dark red sauce (rather 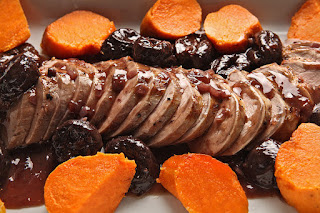 unctuous really) is both sweet and tart, with a boozy hint of Madeira. It strikes a Middle European chord somewhere deep within. Serve with sweet potatoes or garnet yams roasted in their skins.

1. To brine the pork: Dissolve the salt and brown sugar in 2 cups cold water in a glass or stainless steel bowl large enough to hold the tenderloin. Add the allspice, peppercorns, bay leaves and thyme. Submerge the meat, cover and refrigerate at least 8 hours (overnight is better). Before cooking, remove the tenderloin, pat dry and bring to room temperature. Heat the oven to 400 degrees.

2. To make the sauce and roast: Simmer the prunes in the red wine until slightly softened, about 5 minutes. Turn off the heat, stir in the ginger and orange zest, and steep for 10 minutes

3. Heat the olive oil in a heavy stainless steel skillet over medium-high heat. Lightly brown the tenderloin, about 3 minutes per side. (Turn off heat and use the same pan to make the sauce.) Transfer the tenderloin to a small roasting pan. Roast uncovered for about 15 minutes, until an instant-read thermometer registers 140 degrees. Let rest for 10 minutes before slicing. (Residual heat will cause the meat to continue to cook a bit while resting.)

4. To finish the sauce, melt the butter in the reserved skillet over medium heat. Add shallots and thyme, and season lightly with salt and pepper. Cook for about 5 minutes, until softened, stirring with a wooden spoon. Scrape up any browned bits to enrich the sauce. Add chicken broth, turn up the heat, and simmer 2 minutes. Stir in the prunes and wine, and simmer for another 2 minutes. Add the Madeira if using. Taste and correct the seasoning, then add the potato starch mixture and cook for another minute to thicken. Spoon sauce and prunes over the sliced tenderloin.