I am reading the most delightful book at the moment, The Little Paris Bookshop. "Monsieur Perdu can prescribe the perfect book for a broken heart. But can he fix his own?" The bookshop owner, M. Perdu has a barge on the River Seine which he has converted to a bookstore. He won't, basically, sell you just any book, but one which he thinks fits you personally and which can cure what ails you. Unfortunately he cannot prescribe a book like that for himself. The book is full of interesting characters and resonates of France. M. Perdu himself lost his love 20 years before and although she sent him a letter he has never opened it - until now - after Perdu is finally tempted to read the letter, he hauls anchor and departs on a mission to the south of France, hoping to make peace with his loss and discover the end of the story. Joined by a bestselling but blocked author and a lovelorn Italian chef, Perdu travels along the country’s rivers, dispensing his wisdom and his books, showing that the literary world can take the human soul on a journey to heal itself. The book is written by Nina George. She is, apparently, a very prolific writer and hails from Germany.

I also just finished a book by Clive Cussler. This author was recommended by a bowling friend who apparently reads many of the books I too enjoy so I decided to try one. I enjoyed it, but the premise seemed a bit far fetched and the situations people got into were not so exciting because you know they will get out of them. Yes, this applies to most books, but these guys were in and out of situations on almost every page. I have ordered another from the library. We'll see how I get on with that.

To my author friends, I thought this one was perfect for you. It's from How to Geek. 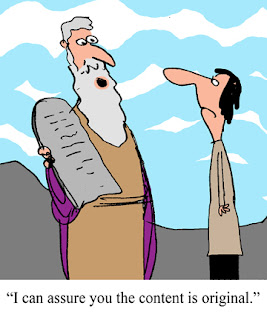 Matt went to the laundry room this morning only to find that the machines were not available. He 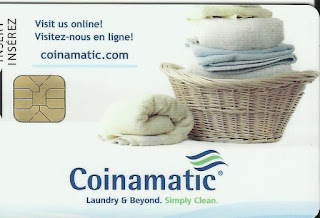 later ran into some other tenants who told him what was happening. Finally, I was off to exercise class when I met the Property Manager and the Super's wife who were going round delivering a special card and a leaflet explaining how to use it. It turns out there is a new machine downstairs which you use to load money onto this card - using either a credit or debit card or cash - and then use the card on the machines to pay for washing and drying. At that  time it will tell you how much money you have left on your card. So, OK, No problem, right? Wrong. For a start in the exercise class we have a number of elderly people who don't understand any of this. Our 94 yr. old was in tears because the whole thing was confusing her badly. A neighbour is going to show her how to use it all. She doesn't have a credit card and doesn't really understand a debit card. She pays for everything with cash. Some of the others were similarly confused it seemed. Not only that, we couldn't use the machine today so the neighbour couldn't demonstrate how it worked. I mentioned to the super's wife that this woman was so upset. She was extremely unsympathetic (big surprise) and said her son could explain it. He doesn't live in the building!! For me, I am quite happy as it means I can charge the money to my Visa on which I get cash back and we don't have to go to the bank all the time to get coins for the machines.  Only trouble was, I wanted to load the card today because we have a load of towels to wash, guess I was out of luck.

This looks wonderful to me but I don't think Matt would like it somehow. He doesn't like kimchi for a start, I gobble it down.

Could this be the anti-ramen? Either way, it’s my new favorite cold pasta, custom-made for hot summer weather 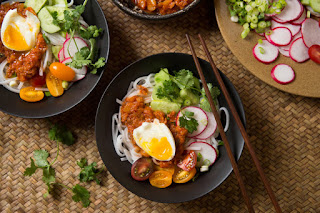 because it is refreshingly and unapologetically spicy. Make the sauce in advance, but wait to toss with the noodles until just before serving. While you could order Korean ingredients online, it’s more fun to go to a Korean supermarket, if only to see all the different types of kimchi. Korean red pepper flakes are without seeds, and only medium hot, so you can use a lot.

2. Bring a large pot of generously salted water to a boil. Add noodles and cook for about 5 minutes, or until cooked through but still firm. Drain in a colander, transfer to a bowl of cold water to cool, then drain again and set aside, covered with a towel.

3. Just before serving, put noodles in a large mixing bowl. Add the sauce, along with cucumber, tomatoes, radishes, scallions and chile (if using) and toss gently to coat. Divide among individual serving bowls. Top each bowl with a halved egg, sesame seeds, cilantro and a squeeze of lime juice.