Saturday night we watched Coast: Australia. It was particularly about the Great Barrier Reef and they mentioned that Google are helping to finance research of the reef. So, of course, I had to Google. I found lots of YouTube videos of life on the reef. Beautiful and fascinating.

This video is quite long but well worth watching if you are interested in this kind of thing. Obviously I am and I hope you are too. Particularly as the reef is suffering damage and was recently the subject of a fight to prevent oil drilling in the area.

I have mentioned Flank Steak a few times lately. It is a somewhat tougher cut of meat and has to be marinated; the other week Matt threw some away because he said it was too tough to eat. So, I came across the following recipe and thought I would try it. In fact the recipe I found was for pork tenderloin but there was, originally, a note saying Flank Steak could be used, so use it I did. My picture isn't very good I'm afraid. Matt had already started eating plus you cannot see there is rice underneath. I have another serving left and am dithering with whether to re-heat it or serve it cold. It was really delicious and pretty spicy hot. I put all the marinating ingredients into the bag first and then added the meat. less messy.

A Korean inspired recipe of marinated meat. Easy, quick and delicious. No wonder it's one of Korea's
most beloved meat dishes. Pork tenderloin can be used. 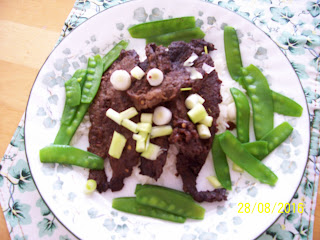 1. Prepare the beef by cutting it into really thin slices. Place the meat in a ziploc bag. Set aside.

2. In a bowl add the garlic, ginger, soy sauce, chili flakes, pear, sesame oil and brown sugar. Whisk everything together well. Pour the marinade over the beef, close the ziploc bag and shake it around a bit to make sure that the all the meat is covered in the marinade. Let it marinate at room temperature for 30 minutes or refrigerate for up to 8 hours.

3. Add 1 tbsp of the vegetable oil to a large skillet and heat it over medium high heat. Add half of the meat to the skillet and arrange it so that it's in a single layer. Cook it for about 3 minutes without touching the meat, or until the meat starts to brown, almost char, then turn it and cook for another 3 minutes until it's browned on both sides. Remove from skillet to a bowl and set aside.

4. Add the remaining tbsp of vegetable oil and remaining meat along with remaining marinade. Repeat cooking the same as above.

5. Serve over cooked rice or noodles and garnish with chopped green onions.