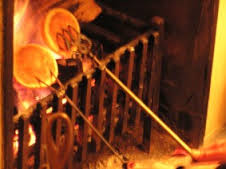 I was eating a piece of toast and started thinking about toasters and then open fires. I don't suppose there are many places where homes are heated by open fireplaces any more which made me nostalgic for the days when we used to toast bread on a long fork held up to the flames. Crumpets too were toasted this way and another thing we used to do was to butter one side of a piece of bread and toast the other. Delicious. The fire used to give the toast such an excellent flavour which a toaster doesn't achieve. As the song says, we also used to 'roast chestnuts over an open fire' too. In fact we had a brass bed warmer which was actually an antique and we would put the chestnuts inside to cook them. Not good for the antique I guess. Looking for a picture, I see Amazon.co.uk still sells toasting forks so I guess there are still lots of open fires in the UK. Many older houses are probably still heated that way. Only trouble with that, you were usually warm enough in the room with the fire, but when you left to go to another room or to bed, it used to be chilly as all get out. However, toasting over an open fire is a gustatory experience not to be missed.

There are many, many older house in the UK and I don't suppose that many of them have been retro 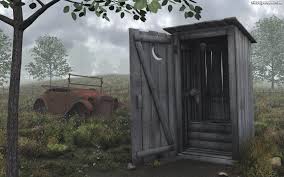 fitted with central heating although these days they probably have electric heaters all over the place. I remember my first parents-in-law having a toilet outside, built on to the house, but you had to go outside to use it and the seat could ice up during the winter, causing all kinds of problems. Now I think of it, this was very much the case in Canada until quite recently. I have stayed in places where they had little or no plumbing and the toilets were outhouses. I remember one place in the Algonquin Park area where there were bears around and I made Matt come outside with me - I would NOT go out there alone in the dark. Not sure what he would have done if a bear had turned up mind you. There are probably many outlying places in Canada that do not have regular indoor pluming due to the vast distances. However, I expect most have septic tanks these days.

For my vegan friends. You do need an ice cream maker for this unfortunately. I remember my mother used to make ice cream in the freezer without any machines. We used to have ice trays with removal dividers. I assume you can still buy those. She used to take out the dividers and put the ice cream mix in the trays. It was good. 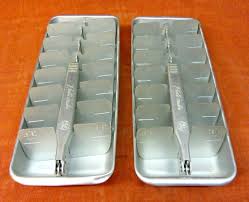 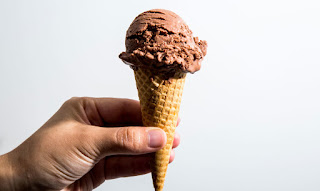 1. Place vanilla bean and cashews in a large bowl and add 2 cups boiling water. Cover and let sit at room temperature at least 12 hours (hydrating the cashews thoroughly is key for a silky, smooth ice cream).

2. Heat chocolate in a heatproof bowl set over a saucepan of barely simmering water (bowl should not touch water), stirring, until melted. Remove from heat and let sit, stirring occasionally, until cool, 10–15 minutes.

3. Transfer melted chocolate and cashews and their soaking liquid to a blender. Scrape in seeds from vanilla bean; discard pod. Add sugar, cocoa powder, and salt. Purée until smooth, about 30 seconds. With the motor running on medium speed, slowly stream in oil and purée until thick and creamy.

4. Immediately process cashew mixture in ice cream maker according to manufacturer’s directions. (Head’s up: this will take longer than a traditional dairy-based custard to reach soft-serve consistency.) Do not chill before processing or oil will harden into tiny bits and texture will be grainy.

5. Transfer to an airtight container and press plastic wrap directly onto surface. Freeze until firm, at least 4 hours.

6. Do Ahead: Cashews can be soaked 3 days ahead; cover and chill. Ice cream can be made 1 month ahead; keep frozen.