Today is, hopefully, the last day we will be getting a visit from the pest control people. I haven't seen one of those living fossils (I have a much better name for them) for a long while so I think they have finally gone. I was talking to a woman who lives down the hall from us who has also had the problem as long as we have. She is still having a lot of problems and she says now the landlords say she has to pay for the pest people herself because when they come to her place they don't find anything. I feel very sorry for her as she is totally on her own and told me she has hardly seen her daughter since it all began. Nice daughter. I told her to report it all to the Landlords and Tenants Bureau. I can't really help her, let's face, it we needed help ourselves. I might say our pest workers don't look anything like the picture. They sure don't wear any kind of hazmat suit which is what this looks like and I haven't seen them wear masks either, but then I am not here the whole time.

Having missed the opening of the Kimbop company being started by the grandaughter-in-law of our friends, we have decided to have a luncheon, with the other friend who was coming with us and then couldn't, so I have now ordered several trays of kimbap to have for lunch on August 9th by which time I hope our home will be back to normal and we can relax and enjoy it. There are, apparently, several differences between kimbap and sushi. In case you wonder or are confused, I was, kimbap is what the food is called, Kimbop is the name of the new company started by Jinah Allen. I do hope she makes a success of it. I think it's such an excellent idea. Although you can buy sushi round here, there is no source (or wasn't) of kimbap which is why she decided to start making them.

You don't have to turn on your oven to make this decadent recipe.

In his version of no-bake cheesecake, baker and cookbook author Kamran Siddiqi beats melted white chocolate and citrus zest into the creamy filling for a deep, decadent flavor. Makes one 9 inch cake. 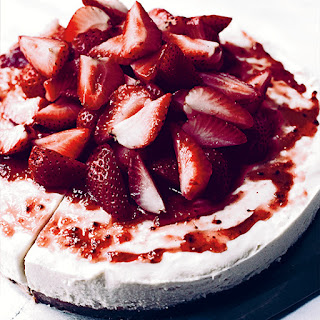 1. MAKE THE CRUST In a medium bowl, mix the graham cracker crumbs with the butter, sugar, vanilla and salt until evenly moistened. Press the crumbs over the bottom of a 9-inch round springform pan. Freeze until firm, about 20 minutes.

3. In a stand mixer fitted with the paddle, beat the cream cheese with the confectioners’ sugar, vanilla bean paste and orange and lemon zests until smooth. Gradually beat in the white chocolate. Scrape the mixture into a large bowl.

4. Wipe out the bowl of the stand mixer and add the cream to it. Attach the whisk and beat the cream at high speed until firm peaks form. Stir one-third of the whipped cream into the cream cheese mixture, then fold in the remaining whipped cream until no streaks remain. Spread the cheesecake filling over the chilled crust in an even layer. Cover with foil and refrigerate for at least 3 hours or overnight.

5. Unmold the cheesecake. Top with the strawberry jam and garnish with quartered strawberries. Cut the cake into wedges and serve.

7. The cheesecake can be refrigerated for up to 3 days. Top with the jam and strawberries before serving.