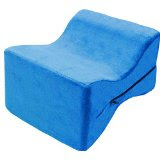 I bought, and received on Wednesday, a memory foam leg pillow. When it got here I thought it was way too big (thick) however, I used it on Wednesday night and it worked. I have a dicky hip which can give me problems when I am in bed. Only one difficulty when I turned on my other side, it was fine for my legs but not for my bad shoulder. In case you wonder, these are some of the delights of getting older. Now I need something to stop my arm dropping down and pulling on the shoulder. Oy vey. Mine is white by the way, not blue. Of course if I had another hip operation I wouldn't need it anyway, but really and truly my hip is not bad enough to warrant a replacement. Pity, it would mean I would get to see "Doogie Howser" in action. In case you don't know or remember, I am referring to my orthopaedic surgeon who looks about 20 to me. Actually I wouldn't see him in action although it is possible. Matt stayed awake once for a hip replacement. It caused him much amusement because he was listening to music on a cassette and it happened that the 1812 overture was playing just when the surgeon was hammering the spike into his leg. The hammering was exactly on time with the cannons firing in the music.

A goodly portion of our home restoration has been completed now. We have all the pictures back on the walls too, they looked so bare. Bugs can hide in them apparently. Just got two more plastic containers to unpack but as they contain a lot of silverware which is somewhat tarnished and needs cleaning, I probably will leave most of it til the weekend. My silk flowers are still in hiding though and the cases containing our winter clothing will probably remain where they are for now too. Both things are in are storage room. My linen cupboard is a right mess at the moment, I wasn't really up to sorting it properly today. Of course we bowled this afternoon too. Still managed to get a lot done.

Not much food preparation been happening, supper has been cheese, crackers and salad although we had a few strawberries to finish off. Yesterday I had my hot and sour soup for lunch which I enjoyed. I suppose if I ate that more often I would get sick of it, but at the moment I feel I could eat it forever.

I bought some salmon fillets on Wednesday so maybe for Friday night....... 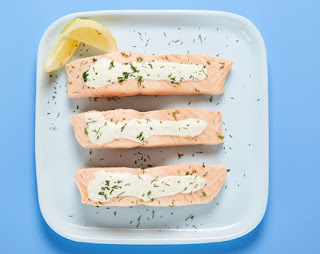 1) In a large skillet, combine wine, water, lemon slices, dill sprigs, bay leaf and peppercorns. Bring to a boil over high heat.
2) Season salmon fillets with salt and pepper. Once the water has boiled, add salmon to skillet, cover and turn the heat off, letting the fish poach for 10 minutes or until flaky. Remove salmon from liquid and transfer to plate, refrigerating for at least 2 hours before serving.
3) For the sauce, in a medium bowl, whisk mayonnaise, buttermilk, chopped dill, lemon juice, mustard and lemon zest. Chill and serve with poached salmon.
Serves 6