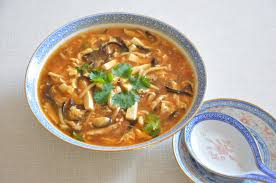 So, Tuesday morning we are taking life at a fairly leisurely pace. Most of the preparation for the pest control people was done anyway. 8:30 a.m. there is a knock on the door and it's them. I proved that they were supposed to come at 12:30 not 8:30. Not sure who made the screw up (they are blaming the building manager). Anyway, I said we could be ready to leave in an hour so we dashed about and got ourselves ready and off we went. Wanted to exchange something at the grocery store so that is where we went. I then bought a coffee there and sat in their cafeteria area to drink it. Used up a little time. Eventually we went to the Mandarin for lunch. We were there a bit early - the doors are open but they don't start seating til 11:30.  Guess what, they still had chocolate dipped bacon so, of course, I had some. I also got some hot and sour soup to go which I will have for lunch on Wed.

Then we headed for Victoria Lanes bowling alley. To get there we had to follow a detour as they have part of the street pulled up (what's new round here lately) and I was interested to see that all the streets we crossed during the detour had had their names removed. I wondered why. However, we got to the lanes and bowled four games and Matt really teed me off by getting a turkey (3 strikes in a row) I had a couple of good games, but no turkeys.

When we got home, wonder of wonders, Matt's bed hadn't been moved out of position, or it had been put back, so all we had to do was make it. Now of course we have to restore everything to it's proper position but I don't suppose we will do much of that until the weekend now. Hopefully this is the end of it. If I never see another bed bug that will be too soon. I think I am going to lay down some diatomaceous earth by the doorway in case the bugs from down the corridor decided to take a long walk.

I have been using skirt and flank steak a lot lately. So long as they are treated properly, they make delicious meals.

Red bell pepper gets used two tasty ways: as a vegetable in the corn sauté and as a pureed sauce for the plate. Fresh corn is not just sweet; it has a surprising hit of umami intensity. Because of skirt 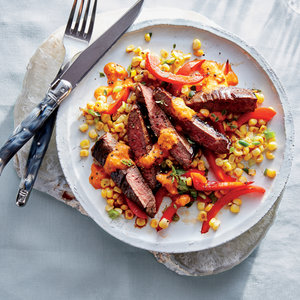 steak's oblong shape, it may be difficult to fit the entire steak in your grill pan. If so, simply cut it in half across the grain and cook both halves at the same time. You can always substitute flank steak, if you prefer.

2. Meanwhile, cut 1 bell pepper into 1-inch pieces; place in a saucepan with 1 cup water and 1/4 cup onions. Bring to a boil. Cook over medium heat 10 minutes or until tender. Drain and transfer to a food processor; process until smooth. Stir in 1 tablespoon oil and 1/4 teaspoon salt.

4. Remove steak from marinade; discard marinade. Return skillet to high heat. Add steak to pan; cook 3 minutes on each side or until glazed outside. Remove from pan; let stand 5 minutes. Cut diagonally into slices. Serve with corn mixture and pepper puree. Sprinkle with thyme, if desired.