Everyone is over the moon (unintentional) about the arrival of Juno at Jupiter. I do hope it will supply the scientists with all the answers they are expecting. I was interested that a speaker on GMA today divided the mission into engineering and scientific. The Engineering part is now over and the Science begins. I was also interested that they intend for Juno to burn up in Jupiter's atmosphere once they are done with obtaining what information they can. As pointed out, we have been polluting our own skies with space junk, we don't want to do the same elsewhere. It has taken a lot less time to get there than I would have expected, only 5 years. I somehow had the idea it would take a lot longer. I was also impressed Google had a doodle up today too. They must have had this prepared well in advance I think.

Went, with a friend, to the Mandarin for lunch. Matt was the first to go for dessert and came back 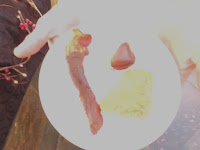 saying there was chocolate covered bacon, and yuk. I was just about to go for some sushi so I went to the desert table and brought back a slice of bacon for my friend and I to share. She said it was disgusting, I thought it was delicious. Matt wouldn't even try it. When I went for dessert I got another slice. My friend's complaint was that the bacon was cold but as Matt pointed out, if it had been hot the chocolate wouldn't have stayed on. We bright females didn't think of that. Someone suggested it would be good with chocolate fondue to dip in it. To me it just tasted like salty chocolate, basically. Friend tried to take a pic but it wasn't very successful. The top part of the rasher is plain with the rest having a layer of bacon on one side. Because it was Canada Day on Friday, they are serving all kinds of "Canadian" type foods including Poutine which I would find disgusting but then I do NOT like soggy fries. Gravy on my fries has never appealed to me.

Sorry I haven't been doing my job commenting on other's blogs but life is a tad harassing at the moment. I will get back into the swing of it soon, I hope.

This sounded a tasty way to cook chicken.


A quick and efficient way to cook a whole bird on the grill is to butterfly it. This method is so 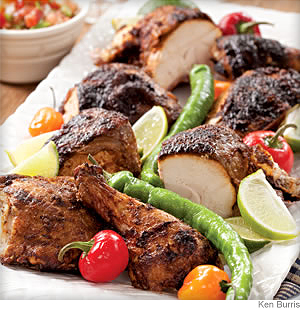 popular, especially in Southern California, that large chains have thrived selling chile-rubbed butterflied chicken to happy patrons. When cooking a whole chicken on the grill, try searing the chicken first over direct heat then finish cooking over indirect heat (as instructed in this recipe). That way you avoid the all too common problem when grilling—chicken burned on the outside and raw in the center. For best flavor, let the chicken marinate in the rub overnight in the refrigerator. Serve with lime wedges and fresh salsa.

Step 1 Combine chile powder (or paprika) and oil in a small bowl with lime zest and juice, garlic, coriander, cumin, oregano, salt, pepper and cinnamon to form a wet paste.
Step 2 Using kitchen shears, cut the chicken down one side of the backbone, through the ribs. Make an identical cut on the opposite side to remove the backbone completely; discard (or reserve it for stock). Place the chicken cut-side down and flatten with the heel of your hand. Generously smear the spice rub under and over the skin and on the interior of the bird. Place in a nonreactive baking dish (see Tip). Cover with plastic wrap and refrigerate overnight or up to 24 hours.
Step 3 Preheat half the grill to medium-high (or build a medium-high heat fire on one side of a charcoal grill); leave the other half unheated. Have a squirt bottle of water ready by the grill.
Step 4 Leave all the spice rub on the chicken. Place the chicken skin-side down over the heat and grill until the skin begins to color and char marks form, about 5 minutes. (Extinguish any flare-ups with the squirt bottle.) Flip over and grill 5 minutes more. Move the chicken to the unheated side. Close the lid and cook, making sure the chicken is flat against the grate, until an instant-read thermometer inserted into the thickest part of a thigh without touching bone registers 165°F, 30 to 40 minutes. Transfer to a platter and let rest for 5 to 10 minutes before carving.