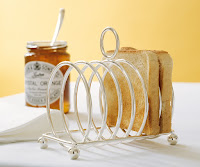 I recently heard someone say how could the English not eat their toast straight away as it would not be crispy. Just had to comment about it. That's why we have toast racks. Agreed, if you take hot toast and lay it down on a plate it will go soggy because the heat causes condensation on the plate which the toast then reabsorbs. However, if you stand it in a toast rack, it will keep good and crisp. I have never really enjoyed the warm soggy toast one gets in restaurants here. Usually with a dab of something - probably margarine - in the centre. No, give me a good old piece of English toast. It may not be hot, but it is definitely crisp. Some nice butter and good English marmalade helps too.

I was reading in my email about a suggestion to use paper clips and/or clothes pegs to hold shut such things as chip bags. I don't know about you, I haven't even owned clothes pegs for many a long year. Of course in an apartment one doesn't have a washing line, but I basically haven't dried stuff outside for years. People always say how wonderful sheets, etc. smell when dried in the fresh air, maybe, but how crumpled they look too. I like using a drier and things come out without needing to even look at an iron. I hate ironing so anything I can do to obviate the necessity of doing any is OK by me. It fascinated me when spending time on vacation in Florida with my step daughters how much ironing they would do. Mind you I didn't think much of the laundry machines in the UK when last I went back. In my opinion they were not nearly as efficient as the machines in North America and presumably the girls were not used to not having to iron things when they were dry.

Tuesday night I watched The Imitation Game again, it really is a fabulous movie. If you haven't seen it, you should. I am disgusted at the way Alan Turing was treated after the war when they discovered he was gay. They figure that because of his work on the Turing machine (computer today) he shortened the second world war by two years and saved 14 million lives. Yet, after the war, they made him take hormone treatment (bloody useless) and eventually he committed suicide. If it weren't for Alan Turing, I couldn't even talk to you all right now. What would life be like without computers with which we have achieved so much. I know it has taken gay people a long time to fight for equal rights - Queen Elizabeth officially pardoned Turing in 2013 (lot of good that did). I was in my teens when he was arrested and later took his own life. I can't say I remember anything about it, but what a sad end to a genius. Benedict Cumberbatch, who played the part, did an excellent job.
I've never been very fond of canned tuna but certain ways of preparing it make it enjoyable. This looks like it might be one of those. This recipe comes from Food & Wine. 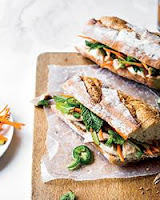 In a medium bowl, toss the tuna, lime juice, fish sauce and jalapeño. Season with salt and pepper. Spread the baguette with mayonnaise and fill with the tuna salad, mint leaves, julienned carrots and sliced pickles. Serve.