I seem to be having a problem with doctors lately. Tuesday afternoon, I had an appointment for a diabetic clinic with mine. The appointment 4:10 p.m. when I arrived, they had no appointment on their computer. It finally appeared that they figured they hadn't received the blood work report from a week ago so they cancelled the appointment but they didn't tell me. When they looked today they did have the report. I eventually got in to see the doctor but about half an hour late which, as doctors go, I suppose wasn't really too bad. When we arrived it was standing room only in the waiting room, but luckily two people moved straight away. Phew. Anyway having told various doctors that I don't think I have diabetes any more, I was finally taken right of Metformin to see what happens. Maybe I can then go off my dozens of other pills I'm on because I have diabetes. Hopefully. If you shook me I would rattle.

Just picked up an article on a new sport invented in the US called fowling. It's a cross between football and bowling where you try to knock down your opponent's pins by throwing a football at them. The link leads to an article which will explain it more. 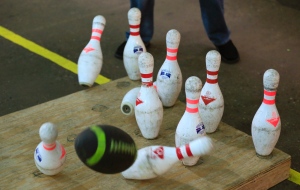 This recipe appeared on Yummly on Tuesday. RecipeTin Eats is a blog. I have never tried cooking such things in muffin tins. I keep meaning to and then never get round to it.

Wonton wrappers baked in a muffin tin to form cups, then filled with a refreshing Thai salad garnished with a little spice kick!

Ingredients
Dressing
Chicken Salad
Garnish
Instructions
Notes
1. Use the side of your knife to smash a garlic clove so it breaks open but remains in one piece. You don't even need to peel it. The garlic is used to infuse the dressing. You could use minced garlic if you prefer but I find that the garlic flavour is too strong for my taste.

2. The cups are best assembled just prior to serving.