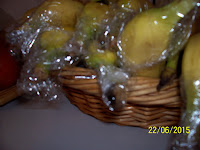 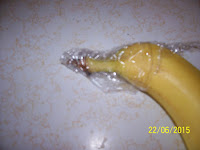 In one of the many emails I get regarding food, I read a tip for keeping bananas fresh. I have been putting some in the fridge and that doesn't do a lot but this tip said to wrap the stems. Matt and I eat bananas every day (me for the help with cramp, of which I get a lot) so we have 14 bananas each week. I decided to try this tip. I didn't do all of them, left a few untouched for the first couple of days or so. I will be interested to see if it works. I hate soft mushy bananas but Matt doesn't mind them. They are OK in a smoothie, but to eat just as a fruit, no thank you. I would like to shop for bananas twice a week but Matt thinks that's nuts. We do drive by the store quite a bit though.

Wednesday League bowling was pretty good for both of us. Not only that, our team beat the others and got 7 points. Just started actually figuring that never bothered before. We are still in third place not sure what place we are in after today.

So it turned out that one of the proprietors at the bowling alley has been playing 'fowling' with his sons for a couple of years. 5 pins instead of 10 of course. They tell me it's great fun but almost impossible to get a strike. One of the sons told me the only strike was scored by his brother's girlfriend. I would like to try it but unlikely I guess. Of course the name makes me think of hunting birds not playing a game. I have to force myself to pronounce it the same as bowling instead of the way I am used to pronouncing that word.

Matt and I used to do something similar on the barbecue, when we had one. We used to cut the onion as below but in 4 not 6 and put a good dollop of butter on it and sprinkle it with salt. Wrap it in foil and put it on the barbecue. Delicious. We also did one onion per person. Obviously, Vidalia onions are not available everywhere so just use a good sweet onion.

Peel onion; partially cut into 6 wedges, being careful to not cut through to bottom of onion.

Grill 40 min. or until onion is tender and lightly browned