Tuesday is a day with not much going on, although in fact I had to 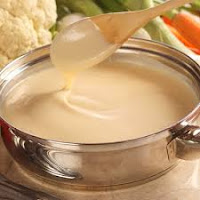 go to the clinic for blood work for my diabetes. Other than that, nothing. So, in the afternoon I decided to make sauces. I ended up making Bolognese sauce, tomato sauce and cheese sauce.  For supper we had tomato sauce over tagliatelle. Every time I make a white sauce (the basis of my cheese sauce) I think how glad I am my mother taught me (over the phone because I lived in London) how to make it. A lot of people make a white sauce with milk and corn starch, but it doesn't have that delicious flavour which a properly made white sauce has when you start with melted butter, and add flour heating it to a nutty roux so the flour is cooked. You then remove it from the heat and add milk in very small amounts mixing it into the roux carefully so it doesn't lump. Once you have added all the milk, you return it to the heat and heat it stirring until it is thick enough to coat the spoon. Then you can add cheese or whatever else you wish to use it for. Even use it on it's own. Of course you have to add seasoning as required too. I know it's a lot of work, but well worth the effort. It also freezes well so you can make it in advance as I did. A roux can be used as a basis for many sauces, in some cases you brown it in the pan until it is very dark, others pale yellow as above. Many cooks now do the mixing with a whisk, but I prefer the old fashioned method.

A while ago I ordered the Second Best Exotic Marigold Hotel which arrived on Tuesday. Wednesday night we played it. Matt didn't enjoy the first one but I did. A lot of people didn't enjoy it which surprises me but then it is very English even though it takes place in India. Judy Dench and Maggie Smith are two of my favourites and this time Richard Gere is in the movie. Considering it is all about retired English people, not sure what an American is doing in the movie, but as I am going to be watching it very shortly, I guess I will find out. Later: I thoroughly enjoyed the film. Lots of fun with a wedding going on too. Judi Dench and Maggie Smith were both brilliant. As were all the other characters. They did a good job in the first movie and continued to do so in the second. Much to my surprised Matt sat right through it, but because he didn't know the characters which we met in the first movie, he found it very confusing. Not really surprising. A friend in England told me they didn't think this was as good as the first one, I am not so sure I agree. Equally as good if not better.

A lot of people in North America apparently don't like lamb. We certainly do.and when I saw this recipe, I thought I would share it. It's certainly a very simple recipe and should taste delicious.

Contributed to Food and Wine by April Bloomfield 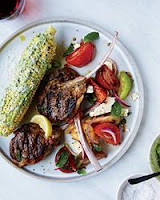 Chef April Bloomfield’s trick for juicy lamb chops is to pound them so thin they cook in a flash, which keeps them moist on the grill.