I ca't remember if I mentioned that I broke a tooth last weekend. I wasn't going to do much about it but then it started to be somewhat sensitive. Our dentist was in the next town so I decided to try and get in to one close by, I did, and they gave me an appointment that morning (Thursday) when they built up my tooth and filled it again as well. Gentle as you can possibly imagine. I was delighted. Of course things have changed a lot in my lifetime. I had been put off, scared, by dentists since I was a teenager and went to a dentist who did 5 fillings at one time without injections, plus he was more interested in my developing figure than in dentistry. Thank God we have health insurance though, the cost was over $385 but I ended up paying $100. That was quite enough thank you very much. Because of my fear of dentistry over the years, I need several things done so I will be going back in a couple of weeks for some estimates. Maybe can't afford it all anyway. We shall see. Wish my teeth looked half as good as those in the picture.

After that we dashed home for lunch and because I was told not to eat for a couple of  hours, I drank some Glucerna which I had left over from when I was so ill a few months ago. Then off to the bowling alley. What a waste of time and money that was. We both bowled appallingly. Just in case, for supper we had some Tuna done Matt's Way so I didn't really have to do much chewing. Not a very exciting day but quite scary enough for me being so petrified of dentistry.

Oh dear, just spotted a headline talking about a leak of 5 million litres of emulsion from a Nexen pipeline in the Alberta oilsands. That is going to put the cat among a lot of pigeons I'm thinking. There has been a lot of fuss about the oilsands in recent years and this won't help calm the issue down. This picture shows the area where the spill has taken place. I haven't read the article properly, getting on for my bed time. But if  you want to follow the link you may do so.

If you live near the sea, this should be a good recipe for you. When we lived in the Carolinas, it would have been great for us too. Makes me hungry just reading it. I love cooking al Cartoccio.

Cartoccio means “paper” in Italian, which refers to the wrapping used to make packets for grilling. Here, foil packets preserve every drop of the delicious seafood juices for sopping up with crusty 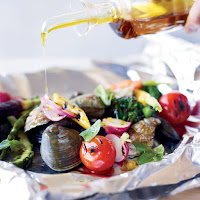