Just listening to the radio, we have it on most of the day, and the DJ was saying how the station is part of the community. That's true enough, when I told friends on Facebook that I had my carotid problem, this same DJ, Randolph Johnson, emailed me and asked if there was anything he could do. I was touched, thought it was wonderful. Don't get me wrong, I thought it was wonderful of my friends too, but totally unexpected from RJ. This is the same guy I talk to when I give recipes on the radio now and again. 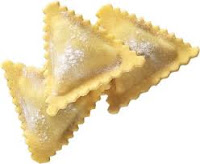 Our local supermarket has a brand called President's Choice or PC. One thing they started doing a while back was selling fresh pasta and then came Triangoli which is triangle shaped ravioli. We keep them because they taste good and make a quick meal. The one's we usually buy are black mushroom and truffle stuffed. Then they have the Puttanesca which are half shell shaped and yesterday I discovered asparagus ones. Whooppee - you know I had to buy them to try. There are other flavours available. including pumpkin which I thought weren't too bad but Matt didn't care for. They only take a few minutes to cook and you can serve them plain, sprinkled with olive oil or with Parmesan or add a sauce like Marinara. They are good any of those ways. They only take a few minutes to cook. I keep them in the freezer and from frozen they only need 5 minutes in boiling water.

I have had so many recipes come in lately for red, white and blue foods for Independence Day. I wondered, in fact, how many people do bother with such things. I certainly wouldn't. We don't have a similar celebration in the UK (or didn't) but of course our colours are also red, white and blue and I cannot imagine bothering to make a dessert, for instance, in these colours for any occasion. Mind you I don't wear red and white on Canada day either and I have not seen any foods specifically in red and white for Canada Day entertaining. Strawberries and cream fits the bill doesn't it?

By the way, because several people said the Yorkshire Puddings looked like popovers I Googled and 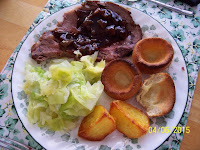 Syrup for dessert, I loved it. The puddings I was used to in the UK were not made individually but in one dish as in the picture. I'm not sure where the idea of making them in muffin tins came from, the States perhaps? But these were the kind which were put underneath the roast as it cooked and absorbed the meat juices and were then served prior to the meat course. The person who could eat the most pudding could have the most meat - obviously they were too full to eat much meat. Poor families used this ploy. They also made puddings with all roasts, not just with beef, as a way of filling everyone up. Personally I don't like my savoury Yorkshire Puds with anything on them, like gravy for instance. You will see in the pic that the gravy is only on the meat although I don't mind it on the veg. But NOT the potatoes or the puds.

Here's an easy one from Kraft Kitchens.

Can you believe you need only six ingredients to get to no-bake OREO cheesecake bliss? Really, it's true! 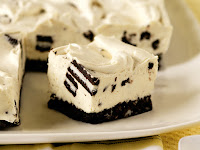 3. Refrigerate 4 hours or until firm.