Ultrasound and The Isles of Glory.

Well, I was a good girl and didn’t munch anything after about 7:30 p.m. and had just a little coffee too. Then couldn’t sleep and ended getting up at 5 a.m. with the result we were hanging around waiting to go for my ultrasound at 7. I felt a bit guilty as the girl who was doing the ultrasound said she remembered me from a previous visit, I’m afraid I didn’t remember her. Anyway, not sure how long before the results will be with my doctor. and hopefully something will be revealed so I don’t have to have the ‘oscopy’. One thing the technician asked, had I had my gall bladder removed, no I haven’t.

Last night, Wednesday, before going to bed early, I finishe

reading the third book in Glenda Larke’s Isles of Glory trilogy. I had read the books some years ago, knew I had enjoyed them very much, but had forgotten so much. Glenda herself said she had forgotten a lot of what she had written. They are being released as ebooks, The Aware, Gilfeather and The Tainted. If you want a really good read, I cannot recommend them highly enough. I feel that way about all Glenda’s books mind you.  Glenda has a blog here as well. The cover on the left is one of the originals although the new books have the second one. On her blog there is a blurb about the Trilogy. I forgot to say they are being issued as ebooks too.

We bowled Thursday afternoon again, Matt and one of our friends were bowling really well whereas I and the other bowler were making a right mess of our games. I was at least getting my 100 and one game I got up to 170, but against Matt and Joy that was nothing. They were running neck and neck so Joy said they were necking!

I haven’t had a chance to catch up with all the blogs this week and there will be lots more tomorrow. However, I should be able to start catching up today. Apologies for being so behind.

This recipe comes from Kevin Lynch’s Closet Cooking. I thought I would share it with you. He really comes up with a lot of good dishes from his closet sized kitchen. Ours is not much bigger than a closet either I might add. I see he suggests a splash of ouzo. I wonder how many people stock ouzo, I used to love the drink, but certainly don’t stock it.

Servings: 4
A quick and easy shrimp pasta in a tasty tomato and feta sauce. 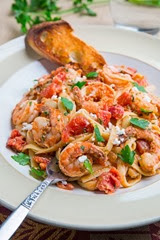 Option: Add a splash of ouzo or other anise liqueur along with the tomatoes or 1/2 teaspoon ground fennel seeds with the garlic and chili pepper flakes for a hint of the exotic.
Option: Use 1 teaspoon dried dill instead of fresh and add to the sauce along with the oregano.
Tip: Serve with crusty bread to sop up any and all leftover sauce.

Email ThisBlogThis!Share to TwitterShare to FacebookShare to Pinterest
Labels: Bowling, Glenda Larke, Medical, Shrimp Linguine in a Tomato and Feta Sauce (aka Shrimp Saganaki Linguine), The Isles of Glory