We just watched, and enjoyed, a PBS programme called Earthflight.

Now I discover it was made by the Brits and has been re-dubbed by the Americans. People appear to be up in arms about this. It was a BBC 1 production and apparently won lots of awards. The programme is described thus: Nature documentary that takes a breathtaking flight on the wings of birds across six continents and experiences some of the world's greatest natural spectacles from a bird's-eye view. We saw Victoria Falls from the air for instance. It seems, from what we saw, that they have attached cameras to some of the birds. There are some spectacular pictures from both above and below. We apparently missed the first episode. This one covered birds in Africa some of whom we starting their migration to Europe. The picture is a fish eagle carrying what appears to be a camera.

Today three, or maybe four, of us are going bowling. I mentioned that we wanted to bowl a second time each week so this is the beginning of the session. I still haven’t heard from some people with whom I left messages. Guess I will have to try again. One problem, some of these people are golfers and the weather has been perfect for those enjoying the sport. Can’t really blame them. If we still played, I guess we too would be out there chasing a little white ball. Churchill described the game as a good walk, spoiled.

This is a dish adapted from the Swiss Rosti which is both traditional and delicious. I found it on Cooking.com

Rosti Potatoes with Ham and Cheese

Traditional versions of this crisp Swiss potato cake virtually swim in butter. By baking the cake, we were able to dramatically reduce the 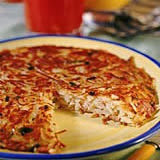 DIRECTIONS
Position oven rack at the lowest level. Preheat oven to 450°F.
Cover potatoes with cold water in a medium saucepan. Cover and bring to a boil. Drain and refresh with cold water. When cool enough to handle, grate the potatoes. Transfer to a bowl. Add scallions, salt and pepper; toss with a fork until mixed.
Coat a 10-inch pie plate or cast-iron skillet with nonstick cooking spray. Brush 1 teaspoon oil evenly over the surface. Spread half of the potato mixture evenly over the bottom of the pan. Sprinkle with ham and cheese. Spread the remaining potato mixture over top, pressing evenly. Brush the remaining 1 teaspoon oil over the surface. Bake until the underside is golden and the potatoes are tender, about 30 minutes.
Carefully loosen edges with a thin metal spatula or a knife. Shake the pie plate or pan to be sure the potatoes are sliding freely. Invert a serving platter over the pie plate or pan. Grasp the platter and the baking dish with oven mitts and carefully turn over. Remove the pie plate or pan. Cut into wedges with a serrated knife. Serve hot or at room temperature.