Thursday night I had my window open and early in the morning I heard a rushing sound and then the biggest clap of thunder I have ever heard. I think the rushing sound scared me most though, I didn’t know what it was. Maybe I was partly asleep although I don’t think so, however, the clap of thunder was certainly enough to waken the dead. There was lots of lightening and more thunder, bot nothing as loud as that one clap. They say a tornado sounds like a train, I think this perisher sounded like a train too. Matt was sound asleep and it woke him. Of course after that we got lots of rain and it was still raining in the morning. Later in the day we ended up with pretty thick fog – couldn’t see across the park although during the afternoon it was pretty sunny. Funny weather.

I spent a fair portion of the morning cooking as I had decided to do a shrimp gumbo for supper – in the States I used to have access to fresh crab and oysters but now I have to make do with just the shrimp. Still tastes very good though. I use a recipe I got from my Time Life cookbooks which I have had for many a long year. I happened to see some nice fresh looking okra which is why I decided on a gumbo. I think I have mentioned before that the first time we came across okra was in the Mediterranean. We ate some in a restaurant and shortly after my mother made a copy of the dish which was a delicious vegetable stew with tomatoes and garlic.

Saturday I am going to make the Stroganoff I posted on October 1. I now have all the goodies. Lots of mushrooms, sour cream and noodles. Next Saturday of course will by our Thanksgiving meal.
This is the recipe I use. This was from the days when garlic was hardly used in England. I used a very large clove of garlic this time. A UK pint is 20 fl. oz. Obviously with the crab and oysters it is more delicious.

Time Life Foods of the World 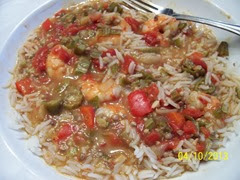 In a large frying pan melt 2 oz. butter over moderate heat. Add the sliced okra and, stirring constantly, cook until the okra stops “roping”, that is until the white threads the veg produces have disappeared. Over a moderate heat melt remaining 2 oz. of butter in a heavy 3 1/2 pt. soup pot or casserole. When the foam subsides, add the onion, pepper and garlic and cook without browning for about 5 mins. Stir in the flour and when it has been absorbed by the vegetables, cook 2 to 3 minutes longer, stirring constantly. Take the pan from the heat and start adding the stock gradually mixing well until all the stock absorbed. Then add the okra, tomatoes, herb bouquet, thyme, salt and a few grindings of black pepper. Bring to a boil, turn the heat to its lowest point, and simmer partially covered for half an hour. Then drop in the shrimp, simmer for 5 mins. then add the crab meat and the oysters. Simmer for 2 to 3 mins or only until the oysters curl around the edges and the crab meat is heated through. Season with the lemon juice, Worcestershire sauce and Tabasco. To serve it is customary to ladle the gumbo over small mounds of hot rice in deep soup plates. This may be omitted if you prefer.