Experiments at Home and Abroad. Bowling.

I have recently ‘gone off’ vegetables I always loved, such as broccoli, Brussels Sprouts, etc. I believe it may be because we are cooking them in softened water. I have never enjoyed veg cooked in softened water. I now plan to try cooking some in distilled water and hopefully that will make a difference. I have been assured that distilled water is basically the steam from boiled water. I buy gallons of distilled water for use with my CPAP machine so thought I would try it. Talking of my CPAP machine, saw the doctor who has now increased the pressure so we will see how I get on.

Interesting titbit I just picked up, South Korea is testing a system of electrified roadways that wirelessly recharge electric buses as they drive. If successful, this OLEV system will allow the use of smaller, lighter batteries in cars and buses resulting in fewer emissions. I would think the rest of the ‘driving’ world would be extremely interested in this.

Bowling went pretty well for me today. I had fun too which is always a good thing. My last score was 198 but all my scores were above my average which, admittedly, isn’t very high at the moment.

I haven’t had stroganoff in years. It used to be a favourite, but like so many dishes of the past, they lose popularity and one forgets about them. This one appeared on Cooking.com and made me remember how delicious it can be.

This classic beef dish is named after Count Stroganoff, a nineteenth-century Russian diplomat and scion of a wealthy family that owned vast tracts of land and salt refineries in the Urals and later led the conquest of Siberia. It was Count Stroganoff who popularized the family dish in the rest of Europe. You can use top sirloin or tenderloin tips instead of beef tenderloin, and farm-raised mushrooms instead of the wild mushrooms called for in the recipe; 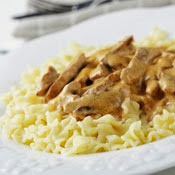 in a pinch, use them instead of all the other types, but using several varieties of mushrooms adds to the interesting complexity of flavour in the dish.

TO PREPARE STROGANOFF: Heat 2 tablespoons of the butter in a heavy saute pan or skillet. Season the meat with salt and pepper, add to the pan, and brown on all sides over medium-high heat. Add the onion and mushrooms, and sauté about 4 minutes longer. Cover to keep warm and set aside. In a separate pan, blend the remaining 2 tablespoons of butter with the flour over low heat to make a roux. When the mixture begins to bubble, gradually stir in the stock and wine. Raise the heat to medium and bring to a boil, while stirring, making sure the mixture is smooth. Stir in the mustard, sour cream, and reserved beef and mushroom mixture, and keep warm.
TO PREPARE NOODLE: Bring a large saucepan of salted water to a boil. Add the noodles to the pan of boiling water and cook at a low boil until al dente, about 10 minutes. Drain, then toss the noodles with the butter to coat.
TO SERVE: Arrange the buttered noodles on warm serving plates and top with the stroganoff. Garnish with the mushrooms and scallions, and serve immediately.