Happy Thanksgiving to all my Canadian friends and readers. 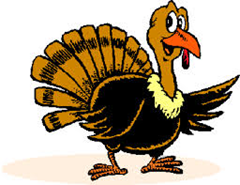 My computer guy was here on Friday. When I first got my desktop he partitioned the very large hard drive into two drives with one large part for data storage etc. I was never happy with that and now have ended up with insufficient room. He is working on giving me more space on the C drive part of the disk. Anyway we were talking about when DOS became Windows 3 and how much I had hated it. I commented he was probably in diapers when that happened, he laughed and

assured me he was at school and learning to use it. Now he is a young, married man with at least one kid that I know of. Old, me??? I wish I had learned as much about computers as he knows. I guess somewhere along the line I had the opportunity. I always remember being told by a colleague, years ago, that I would never be any good with computers because of my lack of math. Luckily things changed and first there was DOS and then there was Windows. Hands up if you used DOS. I know Jeffrey Hargett did.

ur Thanksgiving meal on Saturday as I mentioned. I was puzzling all day about what to do as a starter which wouldn’t load me up with calories. I ended up using some of the pickled asparagus I had bought from Barrie’s Asparagus Farm and crossing it with strips of roasted red peppers which are also pickled. It was very enjoyable, I was surprised Matt liked it as he is not usually enamoured of pickles. In the morning I put an onion, stuck with cloves, into some milk to ‘sweat’ all day and chopped up all the veg I put into my gravy.

I also prepared the Brussels Sprouts and Matt did the potatoes, I had changed my mind about doing roast potatoes. Eventually the turkey breast was put into its plastic bag and then into the oven and everything came together fine.

With it we drank a Pinot Grigio which was not the best I had ever tasted, the vintner was The Big House Birdman. Not sure why Matt chose it, but I wasn’t impressed.  We followed the meal with some carrot cake, a tiny piece for me. Sorry I don’t like pumpkin pie. I love Pecan pie but the calories would be murderous. If you haven’t had your Thanksgiving celebration yet, I hope it’s a good one.

Today, of course, is Thanksgiving Day and we are off bowling this afternoon. I don’t know how many of the league will be there, but a number of us are planning to turn up.

I thought these were a good idea, particularly for a crowd. This was from Cooking.com

This recipe allows you to make frittatas for people who like different items. You can substitute chopped asparagus or artichoke hearts for 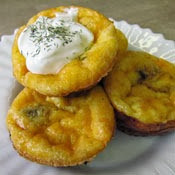 peppers and you can make a meatless version by cooking vegies in butter. Any cheese works well in this also.

DIRECTIONS
Pre-heat oven to 350 degrees and lightly spray muffin tin with non-stick spray or lightly grease.
In a medium skillet, cook the bacon until crisp and drain on paper towel, then cook the sausage until browned, drain and crumble. Reserve 1 tbs of pan drippings.
In the same skillet over medium heat, cook mushrooms for 1 to 2 min in reserved pan drippings from bacon and sausage.
Remove from Skillet and add peppers and cook 2 - 3 min stirring often. Add onion and cook for another minute. Remove from heat.
This can be done the night before and refrigerated until ready to assemble.
To Assemble:
Divide onions, peppers and mushrooms into lightly greased muffin pan. Divide sausage and crumbled bacon into the muffin pan.
In a mixing bowl, combine eggs, cream, salt, pepper and 6 ounces of the cheese. Pour into the muffin pan and sprinkle remaining cheese on each of the muffins.
Bake for 30 minutes or until a sharp knife comes out clean when inserted near the center.
Serve with fresh cut fruit.