Just watched an incredible NOVA series and right now am unable to find the exact programme online. There was a discussion about Hagfish (horrible looking things) which produce a disgusting slime as 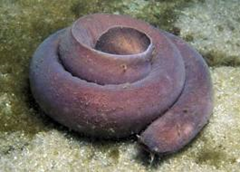 a self defense. It has been discovered this slime contains fibres which are excessively strong so scientists are working on producing these fibres synthetically. Then there were various robots which have been designed using animal movements to enable the robots to work more efficiently. One robot was designed based on the working of an elephant’s trunk another looked like an overlarge dog and can be used to cross terrain which is impossible for current vehicles. Another robot which is more humanoid in shape which can be used in places where humans couldn’t go. Yet more, tiny robots which can think individually but work in a swarm. One use for them was shown with them assisting in searching collapsed buildings for victims. Tomorrow I will try and search for the whole programme.

Today I finished Brandon Sanderson’s Steelheart, I gather there w

ill be sequels. I thoroughly enjoyed the book and can highly recommend it for a fast paced action series. The premise is that somehow certain people obtain super powers and super hatefulness as well. They (Epics as they are called) are all violent and appear to kill at the drop of a hat. Most humans have given up fighting them and just hope they will ignore them too. Life is hard everywhere. However, there is one rebel group and the book is about their fight together with one young man who’s father was killed by Steelheart 10 years ago.

Here’s some more Mummies for Hallowe’en. This was from BBC Good Food.

Makes 12
Cut croissant dough into strips and roll around chipolatas for these spooky bandaged mummies. Serve with your favourite dip. 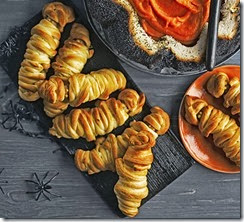