In Her Name, Death by Snake.

I wrote last week about the books by Michael R. Hicks, at that time I 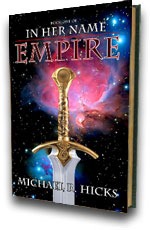 was reading the first trilogy, In Her Name The Last War, now I am reading, I should say devouring, the second book of the In Her Name: Redemption trilogy. I am absolutely fascinated by the stories and the aliens portrayed. It is a long time since a series of books has kept me so interested from start to the current point. This series started with the history of a young human, Reza, who after all kinds of vicissitudes is captured by the Kreelans and taken back to their home world and then his problems there adapting to his host planet and to a people who would kill him as soon as look at him. As the author points out himself, the first trilogy is more militaristic than the second trilogy, but both are, to me, absorbing. Michael R. Hicks allows you to obtain the first ebook in each trilogy for nothing so that you can decide if you like the story. Being on book five, you can see that I like them. I can’t recommend them highly enough.

Hideous tale of two young boys, 5 and 7, murdered in their sleep by a snake. It turns out they were staying in an apartment above a

reptile store, one of the pythons escaped and climbed up to the floor above. The store owner, Jean-Claude Savoie, was hosting the two boys for a sleepover with his own son. Reports say it was an African Rock Python which is about 4.5 metres long and weighed about 45 kg. That’s a large lump of reptile. Being a python it crushes its victims. Another reptile expert from a small, private zoo has said that it is unlikely the snake regarded the boys as food and it is unusual for them to attack humans. They figure the snake escaped and then got into the ventilation system which carried it to the apartment upstairs. This happened in New Brunswick by the way. Personally I consider the sale and owning of such reptiles to be intrinsically wrong as is the import, transport, capture and sale of any exotic animal.

This recipe from Food and Wine interested me because it’s for crab cakes without the crab. Not sure about that, but it does sound tasty just the same and for my Vegan friends, right up your street. I am not certain if we can get Old Bay seasoning round here, but I am sure there is something similar.

Crabless Cakes with Hearts of Palm and Corn

When chopped, hearts of palm break down into shreds that look like fresh crab meat. Richard Landau seasons the hearts of palm cakes with Old Bay, vegan mayonnaise and Dijon mustard for a sensational main course. 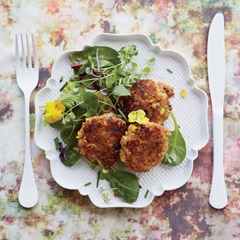 Make Ahead The formed, uncooked cakes can be covered and refrigerated overnight. Serve With Green salad.

Email ThisBlogThis!Share to TwitterShare to FacebookShare to Pinterest
Labels: African Rock Python, Boys Strangled, Crabless Cakes with Hearts of Palm and Corn, In Her Name