Well now I’m upset. An author labelling her book as historical fiction when it was set in 1961. Historical!!!! I was in my 20s and I don’t consider myself part of history. Technically I suppose yesterday is historical, but when people talk of historical fiction I think of early 20th century or before. Not 50 years ago!!! My past is not historical, I am not a figure from history. Hmpf!!

At the moment the weather at our North Carolina destination is cool in the morning but warms up during the day which will suit me down to the ground so long as it stays that way. Our friends who are already there for their vacation won’t be too happy if it isn’t beach weather, but as we aren’t really beach people it won’t affect us that much although we both like to spend time on the pier and gaze at the ocean or watch the fishermen and women – fisher people? In fact I was discussing with Matt the idea of renting ourselves some rods this year. We gave all our fishing tackle to a friend when we left NC – don’t think they still have it. Some very big fish are caught off thi 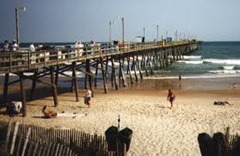 s pier, we haven’t ever caught anything very large ourselves, but certainly large enough to provide supper. This pier has been damaged by hurricanes over the years, a couple of times in my memory, but luckily they have repaired it every time although some of the other piers on Emerald Isle, NC have disappeared since we have been visiting the area, keeping them repaired is a pretty expensive proposition I gather. Long may they continue to do so.

There is a restaurant that I was quite determined to try last year but didn’t get there, so this year I am even more determined. It’s called Sammy’s Seafood and from what I see on Facebook, their food looks really good. We usually go to another restaurant, Floyds 1921 for my birthday meal although normally Matt and I never go out to dinner on a Saturday which is the day my birthday falls on this year. I am still wondering whether to go out that night or not.

Although we can’t actually see it because of lots of trees, there is a school which we face from our apartment. It’s for fairly young kids, no I don’t know what grades, I have never grasped the system. However, after they broke up for the holidays, workmen moved into the grounds and have been there all summer, digging up all round the front, there are great piles of dirt and deep holes. We have no idea what they are doing, but if they can finish it by the time the kids come back to school, I will eat my hat. What really teed me off, Friday night it was nice enough to have the bedroom window open, 6 a.m. Saturday morning they started work, banging and crashing, we were not happy. They have all kinds of heavy machinery there too. 6 a.m. I ask you?

Everyone, but me, loves potato salad. It always turns up at any summer gathering in one form or another. This one was from Cooking.com and I just might try it although I don’t know I would bother to make it.

Potato Salad with Parmesan and Tomato

Serves 4
Potato salad is a perennial favourite - especially in summer - and can be enjoyed as a side dish, or simply on its own. This particular 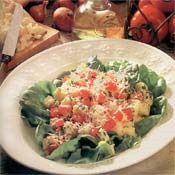 version is satisfying and flavoursome.

DIRECTIONS
Place the potatoes in a large saucepan of salted water. Bring to a boil, then reduce the heat and simmer for 30-35 minutes, or until tender to the point of a knife. Remove and plunge into a bowl of iced water to stop the cooking. Peel the potatoes, then cut them into 1/2-inch cubes and set aside to cool.
Bring a small pan of water to a boil. With the point of a small sharp knife, score a small cross in the skin at the base of the tomato. Drop the tomato into the boiling water for 10 seconds, then plunge it into a bowl of cold water. Peel the skin away from the cross, then cut around and remove the stalk from the tomato. Slice the tomato into quarters, remove and discard the seeds and finely dice the flesh. Set aside.
FOR THE VINAIGRETTE:
Mix the mustard and vinegar together in a small bowl and season to taste. Gradually pour in the oil in a thin steady stream, whisking until the mixture emulsifies and thickens. Stir in the grated Parmesan, then gently toss the potato cubes in the vinaigrette until well coated.
TO SERVE:
Arrange the lettuce leaves on six plates. Pile some potato salad in the center and garnish each salad with a sprinkling of shallot, chives and diced tomato, then a little extra Parmesan and freshly ground black pepper.
CHEF'S TIP:
Round white or red waxy potatoes as well as new potatoes are well suited for using in salads.