Update on Chinese Baby, This ‘n That.

One thing about these blog hops or blog fests, at least you don’t have to think what to write. For instance, I found some fascinating information on what people did to improve their health, some of which I will certainly make use of. However, today, I can’t think of anything to write about. Mind you, after not having had one comment yesterday, I wonder why I write anyway.

I reported the story about the newborn baby found in the pipes of a toilet in China, now they have identified the mother. She says she gave birth over the toilet and the baby slipped from her hands and she couldn’t catch him. She is actually the one who notified the landlord of the baby crying. It’s a long sad story about a young girl left alone to bear the brunt of an unwanted pregnancy and a father who won’t admit his responsibility. I feel very sad for the girl and her baby. The article doesn’t say what the authorities are planning to do now. One thing it did say in the article that Chinese teachers are reluctant to teach sex education because it makes them appear to be condoning pre marital sex. Putting it politely, balderdash. Since writing this, I see the baby is being given to his grandparents.

On Wednesday, it was our summer bowling league day. I discovered our team is lying second, not sure how long for. Especially the way we were all bowling that day, not just Matt and I but the other two team members. Just one of those days I guess.

I am not into politics as you know, but there have been a lot of pretty nasty goings on in our government circles recently, fraud and mismanagement of funds, Mayors accused of using heavy drugs and so on. I have never trusted politicians and this kind of thing tends to confirm me in my beliefs.

Yesterday I had to go for my quarterly diabetes blood work. I have to go early as I will be fasting prior to going. At least these days we can now book our appointments at the clinic, used to be a right pain when one had to get there before the crack of dawn to ensure one got in and out early. Today I have a mammogram. Had to cancel one a while back and forgot to re-book. Describing the three days to Matt I said it was bowling, blood and boobs.

The recipe I told you about for crispy asparagus fries, turns out you can do more or less the same thing with avocado and they look delicious.

Although I continue to enjoy asparagus every day I figured I would give it a rest on here for a while. This recipe also looks delicious. I love Brie, Artichokes and Spinach so what's not to like? 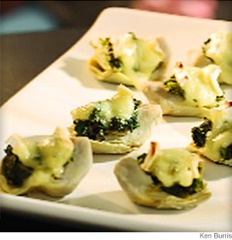 Instructions
1. Preheat broiler. Prepare artichoke hearts according to package directions.
2. Combine spinach, lemon pepper and salt in a small bowl. Top each artichoke heart with the spinach mixture and brie. Broil until cheese melts, 1 to 2 minutes.