What a lovely morning, we were told late Wednesday afternoon that 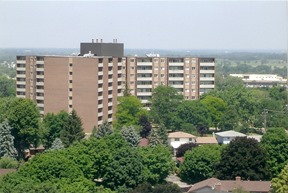 they would be coming to fix our bedroom windows in the apartment, after 38 years the frames were beginning to rot out as I mentioned previously. Not only that, but after all that time the glass was etched from the screen and nothing would clean it off.  Not the balcony windows you can see in the picture, but the smaller windows ether side.  We are tucked right in the corner behind the tree. So, around 8:30 a.m. they arrived (I was still dressing) so Matt sent them into the computer room to start. I threw my clothes on and dashed in there to cover all the electronics. One older guy was relatively quiet but his two young assistants could NOT close door quietly and they were in and out, in and out, it was driving me crazy. I said before we had had a device attached to our front door to make it close and that was slamming too (the older guy was the one who installed it so he adjusted it so no slamming there) but leaving a door open when the glass was not in made the door slam too. Jeez. My noives, my noives. That’s without the banging and drilling of course although that hasn’t been too, too bad. My biggest complaint was having to get up and get dressed early. That’s three times this week, I don’t do early, well not dressed etc. early anyway.

Hey it’s quiet, all done, lovely new windows and we can see out of them. Only trouble is, we can’t open them because they have no screens. Those are on backorder apparently. I do hope they won’t take too long. I am not sure how you clean them either, I suppose one can take them out although that looks like a difficult job and not one I think we can cope with.

At the moment I am waiting with bated breath until

my new Android arrives, which it should do any day – Worldstart said 5 days but that may not have taken into account that it was being shipped into Canada. Just my luck it will arrive tomorrow when I am out getting my CPAP machine. Of course I don’t have a clue how to use it but I expect I will enjoy finding out. I don't know but assume it will be an Apple system which I have never used.

I didn't know, until I saw the Google Doodle that May 23, 2013 is the 140th anniversary of the founding of the North West Mounted Police. strains of Rose Marie in the background. 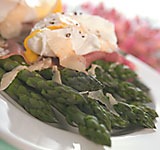 Preheat oven to 450º F (230º C). Steam or simmer asparagus just until tender-crisp, 3 to 5 minutes; drain well. Fill large skillet with water. Add vinegar and bring to simmer over medium heat. Slip eggs, one at a time, into simmering water; cook until whites are firm and yolks are just set. Remove eggs with slotted spoon and carefully blot dry with paper towel. (Eggs may be poached several hours in advance; transfer to bowl and cover with cold water. Drain well before proceeding.) Divide butter among 4 gratin dishes. Divide asparagus among dishes; drizzle with lemon juice. Drape proscuitto over top. Arrange 2 eggs on top of each prosciutto. Season with pepper to taste. Sprinkle cheese over top. Bake for 3 to 4 minutes or just until cheese melts. Serve immediately.