Its NaNoWriMo this month as many of you are aware. Talking to a friend about it 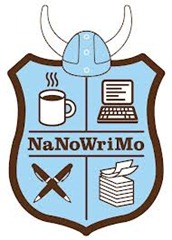 on Facebook and saying I had never really tried writing a book, she said didn’t I have dreams or ever think ‘What if’? I guess I do but had never considered them in the light of writing a story. I actually have very vivid dreams at night sometimes they seem like great adventure stories, but have never had the discipline to write them down in the morning and of course, they mostly slip away fast except for the horrid ones. I am sure its all her fault that I had one of those last night. It would have made a good story except I have no thoughts on where it would have gone to if I hadn’t woken up. As for day dreams, winning a lottery and being in good health would be prominent. I can’t really imagine anything in those dreams out of which to make a story. I just don’t have the right kind of imagination it seems. As for “What ifs”, I leave those to my favourite sci fi readers who seem to cover most of my ideas in that direction. So, no, I don’t think I will be writing a novel.

If I did win a lottery I could afford to go to the States and get instant treatment with a few of my problems. The waiting is one of the drawbacks of our free health system.

This weekend we put our clocks back. In England they have already done it. This whole system was introduced during the war years (WWII) as daylight savings time, I am not perfectly sure why we still do it. Its always a pain to have to go round and set all the clocks, it’s the one time I realise we have so many time pieces, some are easier than others. It has been bugging me that our VCR Timer is an hour out compared to the Digital Box on the TV (no idea what the proper name is) so that will be corrected this weekend. I was too lazy to do the VCR, we don’t use it much any more even though we have lots of VHS movies. This picture has been all over Facebook this week so I thought I would use it too. I’m not sure how many of us will be getting up at 2 a.m. to change our clocks though, I certainly won’t. Will have done most of them before we go to bed with the exception of the car which will be done next time we use it.  Luckily, being retired, it doesn’t have a lot of meaning to us. Not that I remember being much affected by it when we were working. I have heard all kinds of advice this week on how to cope with the change, sorry, to me that’s nonsense, I have been involved in DST for maybe 70 years and we never made any fuss about it, as with so many things, we just got on and did it.

Because I have been on so many antibiotics lately the pharmacist suggested I should take a probiotic yoghurt. so I  tried out a few different ones, some I found way too sweet, some of the others way too sour. I ended up with Danone’s Activia. That’s the one Jamie Lee Curtis advertises. She’s right, its good. I buy the plain unsweetened one and find it delicious. Thanks Jamie Lee, I agree.

Here is a good way of eating a green vegetable if you have anyone in your home who is reluctant to do so. 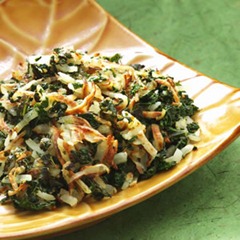 ached egg on top for a hearty breakfast or brunch.

A 1- to 1 1/2-pound bunch of kale yields 16 to 24 cups of chopped leaves.When preparing kale for these recipes, remove the tough ribs, chop or tear the kale as directed, then wash it--allowing some water to cling to the leaves. The moisture helps steam the kale during the first stages of cooking.


Ingredient Note: Fresh, partially cooked, shredded potatoes for hash browns can be found in the refrigerated produce section and sometimes in the dairy section of most supermarkets. Alternatively, boil potatoes until they can just be pierced with a fork but are not completely tender. Let cool slightly, then shred.

Place kale in a large microwave-safe bowl, cover and microwave until wilted, about 3 minutes. Drain, cool slightly, and finely chop.

Meanwhile, mix horseradish, shallot, pepper and salt in a large bowl. Add the chopped kale and potatoes; stir to combine.

Heat oil in a large nonstick skillet over medium heat. Add the kale mixture, spread into an even layer and cook, stirring every 3 to 4 minutes and returning the mixture to an even layer, until the potatoes begin to turn golden brown and crisp, 12 to 15 minutes total.