The radio were playing a bunch of war songs and I was astounded to hear Gracie Fields singing Ave Maria. She was so popular during the second world war and now only old fogies like Matt and I even know who she was. Although untrained, she had an absolutely marvellous voice. This is a recording of her singing Now is the Hour – its followed by some version o; Lollipop, Lollipop. I found Ave Maria and this is worth a listen. You have to remember she was untrained as I said. She was referred to as Our Gracie, presumably because she was a Lancashire lass; Gracie travelled to the front lines many times to entertain the troops during the second world war. She made a lot of money in her career and was extremely generous with it setting up charities and funding travel for troops in her home town of Rochdale during the war years. She eventually moved to Capri, Italy to live and finally died there in 1979.

Getting ready for bed the other night, I discovered I had lost an earring. The only place I had been was the bowling alley but so far, it hasn’t turned up. It was a gold hoop and I was very fond of wearing them. I hope I can claim it on insurance. Its been a weekend for problems, my computer guy has been in twice to fix problems with my computer caused by all the dust when the floor was laid. I phoned the flooring company and they said the computer guy should call them and they would see what they could do. He still has to come back so its not over yet.

I ordered a book from the library, don’t know who told me about it;  by

the time it arrived it didn’t strike me as very appealing. I’m glad I didn’t just take it back, its turned out to be an excellent story. Its Thieftaker by D.B. Jackson and is set in Boston prior to the American Revolution. There is a long blurb on Goodreads if you would like to read about it (maybe that’s where I heard of it, but I don’t think so). I don’t know this author but on the cover I read he has been writing epic fantasy for 15 years and is now combining that with his love of American history. I will have to look out for other books by this author. I have another book to read after this one, its by Brandon Sanderson who usually writes huge books. This is a slim little book called The Emperor’s Soul. I was very surprised. I have yet another book waiting for me Storm from the Shadows by David Weber who wrote the Honor Harrington books, this is set in the same world I understand. I have all the Harrington books as ebooks. 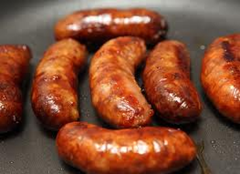 I have, for some reason, had a craving lately for English bangers (sausages) something I won’t be able to satisfy. I like Jimmy Dean sausages too, but can’t get them here, only in the States although, in fact, I don’t remember seeing any when we were in NC during the summer. We get some reasonably good sausages locally, but not like the English ones I used to buy at my local butcher’s. Oh well, hope the craving passes off soon. I used to like it when some of the sausage meat crept out of the ends and became crispy on the outside, yum.

This is a recipe intended for Thanksgiving in the States. Obviously it would make an excellent hors d’oeuvres for any occasion.

Contributed to Food and Wine by Ford Fry 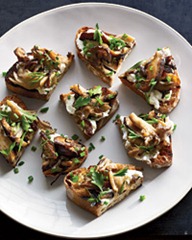 Southern cooking is often very meat-focused, but chef Ford Fry likes to emphasize vegetables. For these crostini, he tops creamy ricotta with a mix of garlicky mushrooms and a handful of herbs.