Friday was hoping to repeat the performance. I wasn’t with him on Friday so friends suggested he should leave me at home to improve his bowling. I don’t think so thank you. A couple of people said there were light snowflakes when we walked into the alley. I guess I had my eyes shut, I didn’t see any! When we got there the computers were down again – I do hope when they find a new alley they will install new computers, these really are the pits. Luckily shortly after we started bowling they came up again. As I had just thrown a strike I wasn’t very happy, but everyone on my team allowed me to put it into the system. I don’t throw that many strikes these days after all. I bowled an average game, Matt didn’t. However, he didn’t seem so upset this time after his Friday performance.

Today and tomorrow Matt has medical appointments, we never have t

ime to do anything else but go to the doctor’s these days. The one today is in Cambridge, next town, so we are calling in at a friend’s house to deliver some Avon and she has invited us to stay for supper. Nice of her. Funnily enough we are also going out to supper on Saturday and then again the following Saturday we are going to the annual pigtail banquet at the Canadian Legion in Hespeler. Not something Matt is enthusiastic about as he isn’t keen on pigtails. They also serve schnitzel so that’s what he has. They always have dancing afterwards, but being a couple of old dodderers, we can’t join in. Pity, I used to love to dance. Best I can do these days is Gangnam Style and then not for long. LOL. I wish the pigtails we were going to eat were roasted rather than stewed, Matt would like those and I would prefer them. It’s a fun evening with a bunch of our friends all of who we met through bowling over the years.

It appears that India are trying to stop people from urinating or defecating in public and are recruiting people to shout, blow whistles, bang drums, anything to shame people who do this. Officials are arming people with such whistles and drums. It is incredi

ble in this day and age that people still do that kind of thing, even in India. Although the River Ganges is one of the dirtiest in the world and certainly contains all kinds of urine and faeces. Not just human either. If you think about it, the areas where cows are considered sacred and not touched, must be covered in dung unless they remove it for fires or something like that. I am told India is a very exciting place to visit, but I am not sure, personally, I could live with the filth which is prevalent in many areas. I may be overstating the case, never having been there. Having lived in Canada so long, I would find a lot of things I remember from Europe to be a problem, let alone more exotic places like India. Maybe I’m just getting too ancient!!

I was never a big enthusiast of corn bread although I did get one recipe from a friend which I liked. Went nuts with it for a while and kind of got tired of it. However, this basically looks very similar with the addition of the pepper. Maybe I will try making some again. 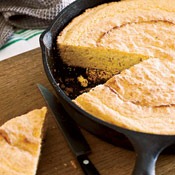 DIRECTIONS
Preheat the oven to 375°. Rub a 10-inch cast-iron skillet with oil; heat it in the oven.

In a bowl, whisk the cornmeal with the flour, sugar, baking powder, baking soda, salt and pepper. In another bowl, whisk the eggs, buttermilk, sour cream and butter, then whisk into the dry ingredients until combined.

Pour the batter into the skillet.

Bake the corn bread for about 35 minutes, until risen and golden and a toothpick inserted in the center comes out with a few moist crumbs. Let cool for 20 minutes. Cut into wedges and serve.