Monday morning it was as cold as charity. 1°C. Although I guess that isn’t terribly cold for this part of the world, but after the lovely weather we have been having, it comes as a bit of a shock to the old bones. Most of the snow has disappeared, but I have no doubt we will be seeing more of it before long. My golfing friend did not go out today! 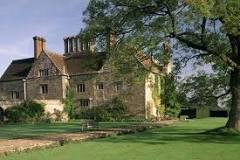 £9,300 in 1902 was one hell of a lot of money. That’s roughly equivalent to £650,000 today or over $1 million Canadian. According to Hilary Melton-Butcher’s latest blog, that is what Rudyard Kipling paid for his home, Bateman’s, when he bought it. I never knew he had that kind of money. Hilary frequently introduces me to things about the country of my birth that I didn’t know. Makes me want to go back and look, sadly, the likelihood of us getting back to England any more becomes remoter as the time passes. Of course I have no doubt that if the house didn’t belong to the National Trust, it would sell for a lot more money than that these days. I have mentioned in previous blogs, some time back, the Queen Anne house where I used to live before we emigrate, and that, a few years ago, was up for quarter of a million pounds.

Having decided over the weekend that we will stay home for Christmas dinner, we

dropped into Vincenzo’s on the way home from bowling (I can think of another name for it) as I wanted to check if they had a Christmas pudding. I always made my own but haven’t done so for a few years and it’s a tad late to start now as they need to ‘enjoy life’ and have time to mature. We found a brandy pudding which looked good, studying it later it appears to have been made with vegetable suet, never tried that, supposed to be healthier which actually wasn’t the reason for selecting a pudding. We also, asked about Spanish Turron, they had heaps of Italian, to me its not quite as good; the assistant went off and found me some, from last year I would guess, which was very nice of her. Anyway, my name is down for when this year’s comes in. I did buy one bar anyway, same as in the picture. I want to get some more chocolate, I really enjoyed that last year. Too much so maybe, (g).

Today I have my pre-op in preparation for my femoral by-pass on Friday. Will give  us a chance to check on timing for getting there although at that time of the morning there shouldn’t be much traffic. Want to check out the parking meters too. Hope they take toonies ($2 coins).

There was a point today when I would really have enjoyed some chicken soup it was so cold. We did have soup, just not chicken which I would have liked.This is a recipe for a somewhat different chicken broth recipe but sounds rather interesting. I personally would freeze the resulting broth but storing in jars would certainly work. You could then use the resulting broth as a base for many other soups.

By The Nourished Kitchen 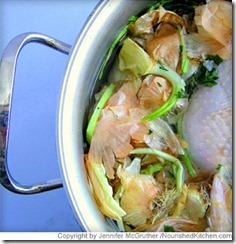