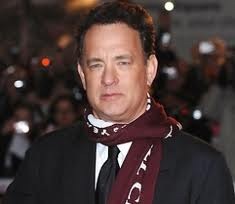 Apparently he plays several different parts, one being an Englishman. He was asked to do the accent for the interviewer and he said it was mostly swearing anyway, then started using the accent and accidentally swore, I think he said fucking, I wasn’t quite listening. Of course then there was a big hoo ha with everyone apologising to the kids of America and the audience of the programme, etc. etc. I thought it was silly, you can’t watch many movies without hearing such words almost constantly plus from what I see of today’s kids, they can swear much better than their parents. IMHOP a simple sorry would have been more than enough. I suppose, in fact, they will get lots of email and tweets complaining about it. Later I saw a blog about it on CBC. He was certainly mortified.

Bowling, for me, was a disaster yesterday. I did pass the hundred mark every time, but didn’t do a whole hell of a lot more. Matt, meanwhile had one pretty good game and one very good game over 200. One of my team mates got two 200 games today which is unusual for her. In one game she got 5 strikes in a row, something to get excited about. Personally I seem to be getting worse and worse. I blame the fact that I am still waiting for my vascular surgery and not very fit. Probably not a valid excuse, but I’m sticking to it LOL.

Today I am cooking one of the rib roasts we bought recently. Looking forwa

rd to it as my food tastes have been so odd lately. I should enjoy a roast of beef though. My tastes have been running to oriental noodles of various kinds, a lot of the things I normally eat just don’t appeal even though I have now been put on a thyroid medicine. Mind you at .025 grams, I guess any results are not going to be that swift. I do tend to want sweet stuff too which, being diabetic, is not a good idea. I could devour a box of chocolates in no time flat. I could, but I don’t.

I often make Leek and Potato Soup and either serve it hot as Potage Parmentier or cold as Vichyssoise. This is a different take on it with bacon and dill. 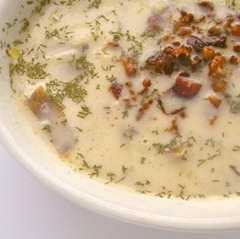 with the soft flavors of leek, celery and potato while the vibrant addition of fresh dill brings the flavors together.
Ingredients
Instructions
Have a great weekend