The aboriginals of Canada are thrilled to know that a Mohawk woman, Kateri Tekakwitha has been canonised by the Vatican. According to the video she was beatified some time ago, but to become a saint there has to be a miracle connected to her and this happened in 2006 with a 5 yr. old American boy, Jake Finkbonner, considered to be at death’s door, last rites had been performed, but the family prayed to Kateri Tekakwitha and the boy was cured. In fact he attended the ceremony at the Vatican to canonise Kateri who was known as the Lily of the Mohawks. She is the first aboriginal woman to be canonised. Her story is quite interesting to read. She died of smallpox but her face cleared miraculously before she died. 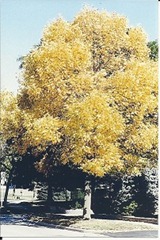 eaves would drop pretty quickly this year because of the dry weather we experienced in the summer – its made up for it since round here – however, ours seem to be hanging on quite well in the park although a few trees are completely bare now. Its funny how much we enjoy the fall colours even though they are a harbinger of winter. I was going to take some pix but my camera isn’t really good enough and Matt’s is 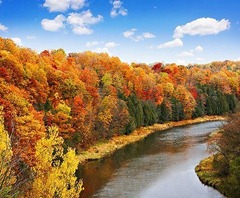 playing him up – we have to take it into the camera shop. This is a picture of a local tree he took a few years ago, doesn’t really do the colours justice though, they are usually so brilliant. The second picture is better – it was taken of the Grand River at the Elora Gorge which is not very far from here. A friend posted this on Facebook and I have stolen it to share with you. Give you a pretty good idea of the terrific range of colours we get at this time of the year. I can see why my friend and her sister like to live in Elora.

the trilogy The Deed of Paksenarrion. I am now on to the second of the new books Kings of the North having finished Oath of Fealty. I read the current or third book Oath of Gold a few weeks ago which is why I decided to re-read because I found over the years I had forgotten much of what happened. I still have one of the older books to read but my friend is busy reading it herself, so I will have to wait awhile. There are two more books still to be published. I had forgotten just how exciting these books are, and I had certainly forgotten a lot of the first trilogy, much of it was like reading a new book. I wish they were in ebook form, I would purchase them. Really good stories. I enjoy everything she has written, and have two of my favourites on my Kindle, The Speed of Dark and Remnant Population.

As you know, I am not a devotee of pumpkin in desserts nor am I a cheesecake fanatic like Matt who likes plain, plain, cheesecake with nothing, but nothing on it. Much to my surprise he tried a pumpkin cheesecake the other day and enjoyed it. So basically for him, here is a cheesecake recipe.

A spectacular, graceful ending for a holiday feast or any elegant fall or winter meal.
Make Ahead Tip: Cover and refrigerate for up to 2 days. 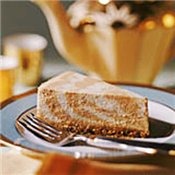 Preheat oven to 325°F. Put a kettle of water on to heat for the water bath. Coat a 9-inch springform pan with cooking spray. Wrap the outside bottom of the pan with a double thickness of foil.

To prepare crust: Combine crumbs and oil in a bowl. Press into the bottom of the pan.

Place the cheesecake in a roasting pan and pour in enough boiling water to come 1/2 inch up the side of the springform pan.

Bake the cheesecake until the edges are set but the center still jiggles, about 50 minutes. Turn off the oven. Coat a knife with cooking spray and run it around the edge of the cake. Let stand in the oven, with the door ajar, for 1 hour. Transfer from the water bath to a wire rack; remove foil. Let cool to room temperature, about 2 hours. Refrigerate, uncovered, until chilled