So Monday found us 5-pin bowling. First time I have been since July. Matt went once in the meantime. After two games, which weren’t bad I might say, my legs had had enough. I have come to the conclusion that 10-pin bowling is actually a lot easier because although the ball is heavier, you get a break between throwing the first and second ones whereas in 5-pin, unless you throw a strike or spare, you have to throw three balls fairly quickly. Plus hopping up and down to do so. No doubt I will get better as the days go by, Friday will be our next game. It was so nice to see so many friends although our team captain lost her husband a month ago so that was sad. She says she misses him a lot, I bet she does.

Back to our new toilet, yesterday the woman who runs the realtor which is re 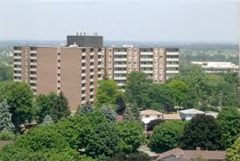 sponsible for this building called in to look at the flooring in the bathroom and instantly agreed for it to be replaced. Whoopee. Now I wonder whether to mention a few other problems to her or to wait a while. I guess I shouldn’t push it though. Nothing serious at the moment and I don’t want to be one of those tenants who is forever causing problems. Of course we pay a pretty good rental so ought to have everything hunky dory. Just looking at this picture again, I hadn’t realised you could see our balcony.

y got all the paperwork I needed from the doctor I visited in the States so I have to send it all off to the insurance company that covered our trip to Emerald Isle. As its close to $200 I won’t be sorry to see it refunded. Money doesn’t grow on trees even if we are surrounded by them in the picture LOL. Talking of money, I hadn’t really thought about it before, but our Travel League bowling fees have gone up over 22%. That’s one hell of an increase. We had to miss the September meet but I am not sure we will be going to the others anyway. It’s the principle of the increase which is rather irritating. It is supposed to be the desire of the bowling houses, but I think they are being rather greedy bearing in mind they get around 16 bowlers at once on one day a month although they do have to buy us donuts and give us free coffee. But as one team member commented he neither eats donuts nor drinks coffee, Matt is a bit the same although he occasionally has a donut. We will have to take this into consideration as we go to lunch first which makes it an expensive day out although it is fun to see our good friends.

Last night, because of my peculiar reactions to food these days, I bought myself some Tom Yum Chicken Soup and some Szechuan noodles with chicken. Both of which were pretty spicy. Matt still had pork to eat and wouldn’t have enjoyed the spiciness. I still have enough for tonight.

This is a recipe from Chatelaine magazine, but I thought it appropriate.