I have just been reading a community blog which states that looking at pictures of baby animals improves ones performance and productivity. Seems rather incredible but that is the result of research by the Japanese. I find cute pictures are shown on Facebook all the time and I must admit I always enjoy looking at them, especially the ones which are shown with funny captions, I should be so clever.

We watched the second part of Half the Sky which dealt a lot with the mutilation of female genitalia which is known as cutting. I knew about it, but had no idea it was so widespread. I also knew it interfered with a woman’s sexuality but not that it impaired her ability to bear children. The description of a bunch of young kids, around 9 or less, being cut and then left tied and lying in a hut for a week urinating where they lay but not being fed so no other problems, was pretty horrifying. But the wonderful woman who is working, in Somaliland, the land of her birth, to deal with this and its results was very inspiring. She is known as the Mother Teresa of our day. there is a picture of this woman with Diane Lane. The terrible thing is the women themselves believe this is a necessity and desired by God. There is a book called Half the Sky which has sent many on a journey to help and study conditions in various lands. 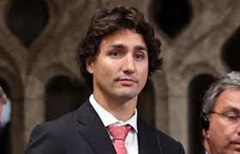 Trudeau, is now beginning to make his move. He is launching a campaign to achieve the leadership of the Liberal party. If he is half the man his father was, I wish him every success. His father was PM when we first came to Canada and we admired him tremendously although he was not universally popular. Of course,  how many politicians ever are. It will be interesting to see what happens over the next few years even though I am not normally a political animal.

The picture of this recipe looks appealing and might suit my rather twisted appetite lately. I don’t remember if I mentioned the DVD I finally got hold of by Jacques Pépin which is full of kitchen tips. Watching some of it I discovered he peels bell peppers, both by scorching the skins, but also with a peeler. I thought this was a good idea and next time I need bell pepper, my trusty peeler will be in use.

A combination of green beans, red bell peppers and sweet mango makes this beef curry recipe colorful. The heat and salt level can vary widely in red curry paste depending on the brand—taste as you go. Serve with noodles and a basil-and- 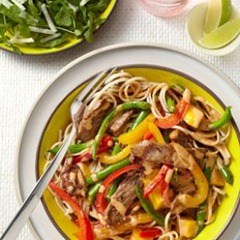