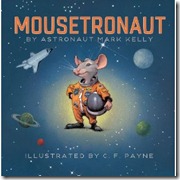 Moustronaut for kids. It is partly inspired by the mice which were taken on one space trip. One of the mice seemed quite at home in zero gravity and floated around eating or drinking with perfect sang froid. The book will, hopefully, be released this fall (isn’t it fall now?). OK, it is available on Amazon so it must have been published recently. It’s a story in pictures and I gather the mouse in question saves the day. Must check it out with my library, just to have a look.

I have been thinking a lot lately about long hair. Particularly ads which talk about

styling it. To me it never looks any different, basically long hair which falls over the face all the time and has to be pushed back out of the way. Many years ago I had very long hair but I always wore it in a chignon or as a kid, braids, and when I first lived in London, I went to a hair stylist who really did style it in some of the ways from the Victorian or even earlier periods. He used to do a wonderful job. Then, one day I decided to have it cut and I have never had long hair since. Too much of a nuisance. Luckily my husband thinks long hair is a mess too.

Went bowling yesterday and managed all 3 games again although I was suffering a bit with my legs. I had moderately good games, but that is about all you can say for my performance. Matt, on the other hand, bowled particularly well, so he was happy. W

e now hear that the alley will be closing at the end of the season because the property owners are planning to build a high rise apartment block. Guess they will make more money that way. However, the guys who own Waterloo Lanes itself are looking for another venue. They would, presumably, have to add lanes and maybe new computers to wherever they choose which I would guess would cost a few sheckels. Of course there were all kinds of rumours flying round. I hope they do find a suitable building, it will be nice to have new lanes.

I haven’t had Pasta e Fagioli in years. It used to be a favourite of mine when we went to a local Italian restaurant in England. Al Fiasco. This one includes sausage, don’t know how that will work out.. 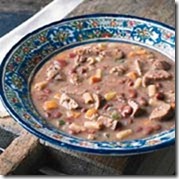 The much-beloved pasta e fagioli (pasta and beans), adorned here with sliced sausage, is truly a meal in itself. The soup has very little liquid and will thicken as it sits. If you'd like to thin it a bit, add a little more chicken broth or water.

DIRECTIONS
In a large pot, heat 1 tablespoon of the oil over moderate heat. Add the sausages and cook, turning, until browned and cooked through, about 10 minutes. Remove. When cool enough to handle, halve the sausages lengthwise and then cut crosswise into slices.
Heat the remaining tablespoon of oil in the pot over moderately low heat. Add the carrot, onion, celery, garlic, and rosemary. Cook, stirring occasionally, until the vegetables start to soften, about 10 minutes.
Puree 4 cups of the beans with 1 1/4cups of the broth in a blender or food processor. Add the puree to the pot along with the remaining1 1/2 cups broth, the whole beans, bay leaf, and salt. Bring to a boil. Reduce the heat and simmer, partially covered, for 15 minutes.
Stir in the pasta. Cook the soup over moderate heat, partially covered, stirring frequently, until the pasta is done, 10 to 15 minutes. Remove the bay leaf. Stir in the sausage and the pepper. Cook until the sausage is warmed through, about 1 minute.