I’m not sure how this will really work, but in New

York they have started showing street signs with haiku poetry warnings on them. They are brilliant and colourful, but won’t they also be distracting? There are 12 signs in all, 10 in English 2 in Spanish, according to the article and it shows you all the pictures. Some of them are funny, but also make you think. I especially like the one with the car door as shown here.

Heard a report this weekend that the Rhine river, in 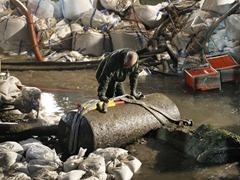 Germany, was somewhat lower than usual and an unexploded bomb from the Second World War, was found, the  bomb disposal experts managed to defuse it, but as a precaution people were evacuated from nearby, a hospital and a prison were both emptied as well as homes and shopping malls. Actually the report I heard said there were 2 bombs, but the article I found said one. The area was in Koblenz which was heavily bombed and mostly destroyed by during the war in retaliation for the bombing of civilian targets in Poland and later London. It surprised me to hear there are still a lot of unexploded bombs in Germany, it was 60 years ago, after all.

A couple of Giant Pandas have been loaned or should

I say rented, to Scotland for the next 10 years. The Chinese will be receiving something like $1 million US a year. The two pandas are Tian Tian (Sweetie) and Yang Guang (Sunlight) and it is, of course, hoped that they will mate and produce offspring during their 10 year sojurn in Scotland. I suppose that if there are any babies, they too will return to China which always seems a little unfair to me.

Cross your fingers for me at bowling today, I really need it.

Subtle herbs compliment the rich and creamy mushroom flavour in this fall soup. The perfect starter for a dinner party. Serve with a crusty roll or baguette for dipping. 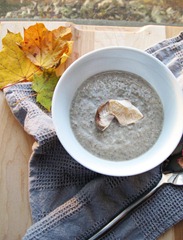 In large heavy soup pot, melt butter over medium heat; sauté mushrooms for 5-6 minutes or until most of the moisture from mushrooms has evaporated; sprinkle flour over mushrooms and cook 1 minute. Slowly stir in broth; bring to boil, stirring constantly. Add Italian seasoning, bay leaf and green onions; reduce heat and cover. Simmer 15- 20 minutes. Remove bay leaf. In small bowl whisk egg yolks with cream; stir 1cup (250 mL) hot broth into cream mixture and then return all to saucepan. Heat over low heat until hot, about 5 minutes, do not allow to boil. Using a hand blender (or food processor), blend soup until it has reached the desired consistency. Add 2 tbsp of water if soup is too thick. Add pepper to taste. Serve sprinkled with parsley, if desired.

Note: If table cream is substituted and allowed to boil it will curdle.