I was interested in this article which talks about a 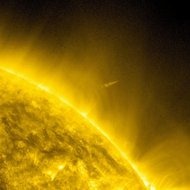 comet, Lovejoy, which was observed going close to the sun, within 75,000 miles, and survived to come out again – not unscathed mind you, it wasn’t as big and had lost its tail, but nevertheless it survived the sun and astronomers were delighted to see it. You can just see the comet in this picture approaching the sun.

What a disaster in the Philippines this weekend, 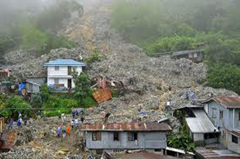 there are still masses of people unaccounted for and over 800 dead at the time of writing. What a terrible thing to wake up and be killed almost within the same moment, always assuming they woke up in the first place. Nature isn’t any too particular how it deals with us. Not their first disaster this year either. I’m glad I live in Canada although we do get weather disasters here, just not as frequently. I did see a report that some of the tons of garbage they are expecting on the west coast from the Japanese disaster has already started to arrive, about a year before it was expected. That will be a great clean up headache.

All the shootings in Canada this weekend, its getting to sound like the wild west – normally we don’t get too much of that kind of thing compared with our neighbours to the south, but sounds like we are 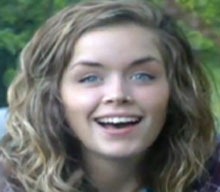 trying to compete right now. One horrific story was of a young man shooting his ex girlfriend, Tabitha Stepple, and two friends of hers whilst they were driving to the airport in Calgary. He rammed his SUV into their vehicle, commenced shooting and then shot himself. One young woman, the driver, is expected to to survive. Death doesn’t seem to mean anything to these young people any more.

Lots of news last night, the death of Havel the Czech leader and defeater of communism, the death of the North Korean leader Kim Jong Il, a proponent of secrecy, and the US troops finally leave Iraq after spending lots of money and lots of lives. It remains to be seen what will happen next as a result of these news items.

I am afraid to report I am still in a lot of pain with my bursitis, hope my trip to Let It Heal will do the trick on Wednesday. I am supposed to go to our Bowling Christmas Party at lunchtime today, dunno if I am going to make it or not.

If you are into big breakfasts, this one would certainly fill the bill. Something I would only want to do for the weekend though. Maybe you could serve it on Christmas morning.

This healthy update of a traditionally rich ham-and- 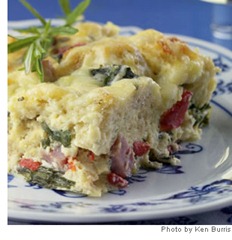 cheese breakfast strata is made lighter primarily by losing a few egg yolks and using nonfat milk. Gruyère cheese has a delicious, nutty aroma and flavor, which means that with the relatively small amount in this recipe you still get a big impact. To finish the makeover use nutritious, fiber-rich, whole-grain bread instead of white. The results: plenty of flavor, half the calories and one-third the fat of the original.

To Make Ahead: Prepare casserole through Step 2; refrigerate overnight. Let stand at room temperature while the oven preheats. Bake as directed in Step 3.