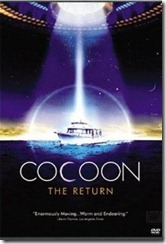 ly loved. Don Ameche, Jessica Tandey and Wilfred Brimley are in it. If you have never seen it, its about a bunch of old geezers who break into a vacant house next door to where they live, a rest home, in order to use the swimming pool. However, magically the old geezers become healthier, fitter, and more like youngsters. If you want to know why, watch the movie. I then learnt that there was a sequel Cocoon: The Return, which I watched on Wednesday night and loved that too.

Having written, yesterday, about the dangers of wild animals in Banff, Glenda Larke wrote about the

young veterinarian who was killed by a wild elephant because she was way too close taking pictures. Read Tropic Temper, linked on this page. As Glenda said, you’d think a vet would know wild animals are dangerous. I have known about the especial dangers of wild bull elephants, especially when they are in musth, since I was a kid and had a wonderful elephant story read to me by a teacher. I have never been able to find this book since. I remember it was a factual story and the elephant in musth was a very dangerous critter.

I gave a recipe on the local radio station again yesterday, third time, its fun doing it. I forgot to mention Restore Family Nutrition though, not very good at this stuff am I? The recipe I gave was one we were having for supper last night and as it was handy, I typed it up quickly and sent it to Randy (Randolph Johnston), at the radio station, CKWR, 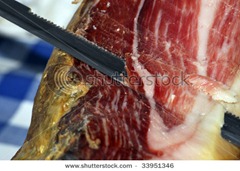 and then talked about it on air. The chicken has to be flattened and I said ‘beat the hell out of it’, don’t know why I said that, not very good for radio I guess. The recipe calls for Serrano ham which I haven’t found round here. I can buy it through the internet but it is horrendously expensive. In Spain my parents used to buy a whole Serrano ham and we would slice bits off it, where it hung in the kitchen, for a quick taste, or a snack. It was expensive in Spain too. We make this dish using Prosciutto which is an acceptable substitute, but if I could use Serrano, I would or would I? I might save it for tasting not cooking.

The recipe is as follows, its from my book The Best Three and Four Ingredient Cookbook which I have shared recipes from before. The picture shows the dish before its been cooked. I eat the cooked lemon, I think it gives a nice piquancy, Matt just squishes the juice. 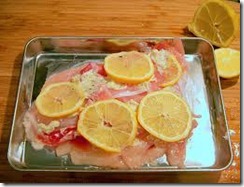 Preheat oven to 180°C/350°F. Beat the butter with plenty of freshly ground black pepper and set aside. Beat the chicken flat between two pieces of Saran wrap. Season with a little salt, remember ham is also salty.
Put chicken in a large, shallow, ovenproof dish and crumble a slice of ham on top of each. Cut eight thin slices of lemon or orange and place two on each slice of chicken.
Dot with pepper butter and bake for about 30minutes, until chicken is cooked. Transfer to serving plates and spoon over any juices from the dish.