Gasoline prices have gone up and are probably going to go up a good bit more if the Egyptian crisis is not soon resolved. If the whole of the Middle East ends up getting involved, we are in for a nasty shock. Mind you, Matt was talking to his oldest daughter yesterday, she has just replaced her car and now has a 6 cylinder which costs her £60 to fill up, that’s roughly equivalent to $95 Canadian. What a lot of money, we have a 6 cyl. and it costs us around $50 to fill the tank which we think is plenty bad enough.

For the last few weeks I have been watching an excellent series on Public Television called Downton Abbey. I assumed last night would be the final episode and wrap up all the lose ends, I assumed wrong. It turns out that 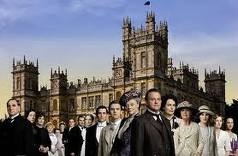 ITV in England, who made the series, is planning more later this year. I thought there might be a book, I thought wrong unfortunately, so I guess  I will just have to possess my soul in patience until they finally come up with the rest of the series. How frustrating though. The story is about a great house, in England of course, and everyone who lives in it from Daisy the kitchen helper (scullery maid?) to Lord Grantham the owner. All of it taking place in 1913/14. In fact the last words of the series last night were an announcement that Britain was at war with Germany. The family is not all sweetness and light by any means and two of the sisters do the most dreadful things to one another, a right pair of b*tches. Then there are a couple of the servants, one who is a thief and another who purposely causes her mistress the fall and lose her baby because she mistakenly thought she was being fired. All good stuff!! Maggie Smith makes a wonderful Dowager Countess.

There is a major storm heading our way and they are talking 30 cm of snow on Tuesday, whether it will miss us as all the snow has so far this winter, we shall see.

A friend who originated in Germany, makes this cheesecake. Another friend was talking about it, she and her husband were stationed in Germany quite a few years ago and she used to make this, but had lost the recipe. In the end, my German friend sent me the link for this recipe which she says is the same as she makes – which is delicious by the way.

Servings: 12
Comments:
This wonderful and creamy German Cheesecake is very light and each bite melts in your mouth. It is not too sweet. This is a dessert that always gets many wonderful compliments. 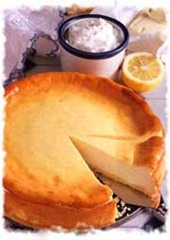 Instructions:
For the Crust:
Sift the flour, stir in the baking powder, salt, vanilla-sugar, lemon peel and sugar, then rub in the butter and knead to a smooth consistency with the egg. Place dough in a plastic bag in the refrigerator for 1 hour.
Preheat oven to 300 degrees F (150 C). You will need a 9 or 9 1/2-inch spring form pan.
Roll out the dough on a well-floured work surface, then form it into a ball again and roll it out a second time. (This dough is the worst behaved of any I have ever had to deal with, but the double rolling helps tame it, and the end result IS worth the hassle). Place dough in bottom of a 9 or 9 1/2-inch spring form pan, pressing it up the sides almost to the top. Set aside.
For the Filling:
Beat the egg yolks with the sugar and vanilla-sugar until pale and foamy. Add the softened butter and beat well, then add the heavy cream and beat again. Add the quark and stir until the mixture is smooth and thoroughly combined.
Whisk the egg whites with the salt until very stiff, then very gently fold in the quark mixture, also adding the sifted cornstarch a little at a time. Pour the filling into the crust shell and gently wobble the pan back and forth until the surface is smooth. Trim the dough, leaving about 1 inch (2 1/2 cm). Bake in preheated 300 degrees F (150 C) oven for 50 to 60 minutes (longer if necessary) until well risen and golden - it resembles a souffle at this point (It will sink in the middle quite dramatically - don't worry, it's supposed to do this). Turn the oven off, and let the cheesecake rest in the oven for 15 minutes; then remove it from the oven, cool for an hour or so at room temperature, and refrigerate for several hours before releasing sides of pan and serving. (I make mine the day before I need it). This cheesecake is very nice served with sliced strawberries, or a raspberry sauce. Keep cheesecake stored in the refrigerator, covered.
*Note:
There are 3 substitutions that can be used for the Quark in this recipe if Quark is not available. One is to use farmer’s cheese, another is to purée cottage cheese in a blender or food processor, and the third is to purée eight parts of ricotta cheese with 1 part of sour cream in a food processor.
Makes 12 servings.