Actors and their Roles. Lost Something? Bowling.

I was talking to Sia McKay (Thoughts Over Coffee) about actors, which made me think of two I particularly admire, Anthony Hopkins and Peter O’Toole. I love Emma Thompson too. If an actor can make me totally forget who they are when they are playing a part so that I only think of the part itself, that to me is a sign of excellent acting.

This morning I am also full of admiration for Colin

Firth’s rendition of George VI in The King’s Speech. What an excellent movie, I do hope you get the chance to go and see it. Although I wasn’t actually alive at the time of most of the movie, it brought back memories particularly of the Windsors and how he abdicated in order to marry Wallace Simpson, much to the disgust of those concerned. Also, the speech itself, which was his first during the war years, I remember hearing recordings of many times in my life. I don’t know the name of the actor playing Winston Churchill but I thought he had the voice down to a T. I heard also, that Colin Firth had worked so hard at perfecting the stammer that now he was having trouble getting his speech to flow properly again. One thing which did stick out like a sore thumb to me was the use of the word loo to describe a toilet. That phrase didn't come into being until many years after the era of the movie, a glaring anachronism. Next week my friend and I are planning to go and see The Voyage of the Dawn Treader, a somewhat contrasting movie.

How’s this for an odd picture, the piano was found in Miami Bay and no-one knows for sure

where it came from. One or two theories of course, but what a very peculiar place to find a piano? Wot no piano stool?

Today is one of our Travel League get togethers for bowling, we are going to Cambridge this time. The restaurant chosen for lunch is absolutely miles away from the bowling alley so it seems quite stupid to me when there are restaurants close by. However, not just me choosing. I think there is only one 5 pin bowling alley in Cambridge where once upon a time there were at least 3 to our knowledge. Such a pity they have disappeared.

I have cooked fish in foil several times over the years and always enjoyed the results. Obviously you can select a variety of different fish to make this dish. The recipe was obviously provided by Kraft but I think it sounds very tasty and we will certainly be trying it. 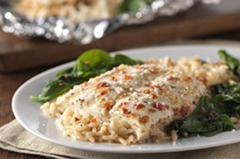 SPOON 1/2 cup rice onto center of each of 2 large sheets of heavy-duty foil with sides slightly turned up. Pour 1/2 cup warm water over each mound of rice; top with 1 fish piece. Arrange spinach around fish; drizzle with dressing.

BRING up foil sides. Double fold top and ends to seal each packet, leaving room for heat circulation inside. Place in single layer in shallow pan.

If you don't have heavy-duty foil, you can use double-layer sheets of regular foil instead.