Sunday evening we hauled out our projector and boxes of slides and spent a couple of hours of looking at old pix taken in the 70’s. This included when we first arrived in Canada so there was a preponderance of Niagara Falls photos, haven’t been there in years, and The African Lion Safari in Rockton, Ontario. In recent years Matt did some security work there for a while so we did go there once in the last 10 years when we got in for free. What really teed me off with these photos, how slim I was at that time. I had joined Weight Watchers in England before we came to Canada and lost 56 lbs so I was really looking good for a while there. Not only that, we looked so young. There were also lots of snow pictures, we don’t seem to see snow like that these days.

http://tinyurl.com/2ue4cxy read this article and it tells you all the benefits of eating just a small portion of dark chocolate every day. Not very much, about the size of a Hershey’s Kiss, and not sweetened or, again, not very much. But its so good for so many things. I wonder if anyone has ever suggested to Hershey’s that they make a Kiss with dark chocolate. I could eat 365 of them a year!!!

I have had a slow cooker for quite a number of years now and have always found it very useful. However, my one bugaboo was that I could not remove the 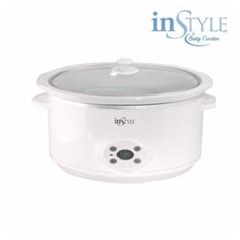 inside for washing so had to be extremely careful not to get the electrical connections wet and which made it always a pain to wash. Yesterday, we had to go into a local hardware store and I started looking at some slow cookers; we ended up buying one, somewhat bigger, with a stone interior which can be removed and if wanted, can be used as a serving dish. Mind you this stone dish is extremely heavy. It is also programmable if one wants, not that I think I will, more for people going to work than me. So, now I need more recipes to take advantage of my new small appliance.

Here is, obviously, a slow cooker recipe. My only problem is the use of canned soups and I would be very much inclined to make my own sauces/soups but it does make it an easy recipe. I would certainly use fresh mushrooms.

Stroganoff, once only weekend special can now be served weeknights thanks to slow cooking. 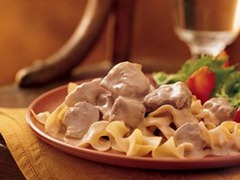 Cover and cook on low heat setting 8 to 10 hours or until beef is very tender.

Save time and tears. Use pre-chopped onions found in the freezer case of your supermarket. Thaw before adding.