I just heard a snippet of news on Good Morning America, scientists have been working with stem cells and have stimulated rabbits to grow new cartilage and hips. Don’t know all the details at this time, but Matt’s instant reaction “I didn’t need all this metal inside me”. I doubt it would be finally approved in his lifetime anyway. Thinking about it though, it must be a pretty slow process surely? I will be interested to see if there are any more reports.

Something that really annoys me, people crying on TV. If I was involved in something emotional, I am damned if I would be interviewed about it whilst I was still so upset. Giving people the benefit of the doubt, I suppose they think they are in control when they agree to be interviewed.

Oops, I nearly forgot to mention a bear attack in a campground in the Yellowstone Park area. One or more grizzly bears attacked people sleeping in their tents, one man unfortunately lost his life but a woman who was bitten on the arm, managed to play dead and the bear left her alone. She was asleep when the bear attacked though so wouldn’t that be like playing dead? They are looking for the bear or bears now and unfortunately the animals will be killed. Can’t put up with that now can we!!!! Seems unfair to the bear(s) to me. There is a video with Jack Hanna who also encountered bears during a hike recently. Jack is a regular contributor on GMA and is the Professor Emeritus at Columbia Zoo. This is his story http://tinyurl.com/2d5nddd.

By the way, I am using my new computer and keyboard to write this blog today, what a difference after using the laptop for a couple of days. I can type properly now. Mind you I have to spend a considerable amount of time re-loading a lot of programmes which I used to have. It turns out that there are no Windows 7 drivers for my scanner so that is, to all intents and purposes, defunct. What a nuisance. Matt is very unlikely to agree I should buy a new one at this stage of the game. I really need a new monitor as this one is old and the fonts are somewhat fuzzy to look at. Oh well. One thing, it is so much faster than my old machine. Isn’t it incredible what a difference 5 or 6 years can make to a computer.

I am not a big fan of canned tuna unless it is well disguised. This recipe from Eating Well looks as though they have done just that.

From EatingWell:  August/September 2005, EatingWell for a Healthy Heart Cookbook (2008)

Tomatoes and tuna were meant for each other, and fresh tarragon seals the deal. Soaking the onion in cold water tames the heat and sweetens its taste. 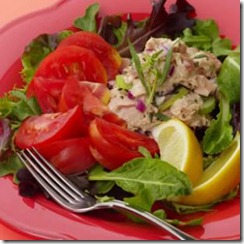 Store in an airtight container in the refrigerator for up to 1 day.

Note: Chunk light tuna, which comes from the smaller skipjack or yellowfin, has less mercury than canned white albacore tuna. The FDA/EPA advises that women who are or might become pregnant, nursing mothers and young children consume no more than 6 ounces of albacore a week; up to 12 ounces of canned light tuna is considered safe.