Last night I heard there was a problem with the new cap on the oil well in the Gulf, they think it may be leaking methane gas. I read an article this morning, apparently it is suspected that the well may be leaking through the sea floor which could cause major ecology problems if its true. The government have said BP can keep the cap on for another 24 hours but must monitor closely. There was quite a storm in Montreal yesterday, including a mild tornado. Apparently a couple sheltered under a tree. The husband is now in hospital with a cardiac arrest, not sure if he has survived or not. Doesn’t everyone know? You DO NOT shelter under a tree during a thunderstorm. Locally a man was killed by lightening and he was out on the water. Not a good place to be in a storm. The movie Inception did really well at the box office this weekend. It stars Leonardo di Caprio. From the previews I have seen on TV it looks as though it is right up my street and I can’t wait to see it. I wonder how long before it is available on video. I don’t normally pay a lot of attention to golf on the TV, but this weekend it was the British Open and there was a young South African, practically unheard of, who ended up winning the tournament in St. Andrews (a very tough course) beating his nearest opponent by 7 shots. A very impressive game. His name is Louis Oosthuizen which made me sit up because my cousin is married to a South African with the same last name. Are they related I wonder??? I am not sure how true this is, although knowing the old fogies of yesteryear, the word golf is supposed to be from Gentlemen Only Ladies Forbidden. I used to play golf with enthusiasm but then lost my game. Then I lost my legs (well it seems like that) now Matt can’t really play either. The joys of aging. Heard from my cousin this morning, as far as they know they are not related to the young golfer.

Last night I watched Star Wars Episode V The Empire Strikes Back – that’s the one with the Tontons in it – where Luke loses his hand plus studies with Yoda for a while and Han Solo gets carbonised. I would have enjoyed it more if there had been no ads, for the first half hour there were none, then they started to cram them in once they had you hooked. I wonder if they are going to show the next movie any time soon.

I had a load of cream available after we had done the Chicken in Tarragon sauce so on Saturday I invented a dessert. I made it again Sunday night and forgot to take a picture. 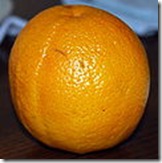 In each of two dessert glasses or dishes, put a broken lady finger, then divide the orange in two and put chunks in each glass. Pour over the liquor of choice (if you want non-alcoholic I am guessing orange juice would work) sprinkle with sugar or sweetener and let sit. Just before serving put a large dollop on cream on top and drizzle chocolate syrup over all. Delish.