Phew it was a hot one yesterday. It reached 33°F here, which, in itself, is not exceptionally hot, but the humidity pushed it up til it felt like 41°F. A friend who works in Toronto said 44°F there. As usual there were lots of warnings out but you still saw TV pictures of people playing tennis and sunbathing in the parks or on beaches. I bet there are a lot of sunburns today. Something a lot of people don’t seem to grasp; you don’t start off white and then lie in the sun for hours. Matt and I sunbathe for about 1/2 an hour at a time until we have built up a tan. There was also a power outage in parts of Ontario yesterday, I felt so sorry for those who did not have their air conditioning. I think I would die. Reports always say how much worse it is for old people in such heat and humidity too. I wonder if retirement homes have back up generators, I was thinking that our apartment building should have.

we were bowling for part of the afternoon and I was told that the pins don’t fall as easily in the heat as they do in the cold. Obviously the alley has air conditioning, but I guess its not on for most of the time, only when there are players in house. That might excuse my summer bowling, not my fa

ult, the pins won’t fall. It is a fact that I kept getting 13s yesterday, meaning that the corner pin just would not fall. Very frustrating. If you are not familiar with 5 pin, the middle pin is worth 5 points, the two on either side of it are worth 3 and the corner pins are worth 2 points. So if you bowl and get them all down except one corner pin, that’s 13. You then have to make a difficult shot and knock down that corner pin. Not easy I assure you. Don’t forget, our bowling balls are not the big monsters of 10 pin either, but small enough to hold in your hand – as in the picture of my ball.

Just watching a bit of TV and there was an Orkin pest control ad which broke my dream. Not quite sure how it started, but everywhere was running with baby cockroaches. What a delightful thing to dream about. Of all the bugs I have ever encountered, cockroaches have got to be the worst.

BP announced yesterday that they have now spent $3 Billion on the Gulf clean up, that’s a billion a month. A lot of money considering the problem isn’t fixed yet. Apparently the beaches aren’t bad down there although thousands of people have stayed away. We saw lots of pictures of people thoroughly enjoying themselves there and on being interviewed said the oil had been no problem. However, the tourist industry is hurting badly in that area. Plus seeing oiled, dying pelicans on the beach can’t be much fun.

Partly because of the heat and partly because we were still full from Sunday lunch, we just had salad sandwiches for supper last night together with a small amount of Brie and crackers. I make the sandwiches the way I have always done, buttering the bread, not slathering it with mayonnaise. I layer lettuce, onion, cucumber and tomato adding salt and pepper on each layer and then cover with the top layer of bread, pushing down firmly. Its refreshing and delicious and does NOT need anything else.

Eating Well have been putting out some low fact frozen treats and the following is one I particularly liked the sound of. Once again this calls for an ice cream maker, but it could be done by hand although it would, of course, take a lot longer.

In a world of designer ice creams, sometimes the simplest can be the best. The full-bodied flavors of brown sugar combined with nutty toasted almonds are all it takes to give this easy-to-make frozen treat a sophisticated distinction. The alcohol in the base mixture acts like an “anti-freeze,” reducing the icy texture sometimes associated with lower-fat ice cream. For a little extra indulgence, try topping a scoop with some crumbled gingersnaps. 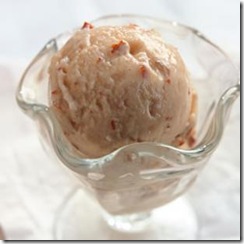