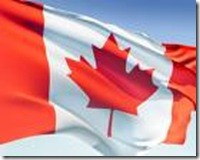 First of all, I wish everyone a very happy Canada Day – hey even Google are acknowledging it today with a Maple Leaf on their name. Maybe not in other countries I suppose. There will be fireworks tonight which we can see from our balcony not to mention all the barbecues and parties which will be taking place. Matt went grocery shopping at about 7:30 a.m. yesterday knowing the stores would be crowded. We normally do our weekly shop on a Thursday but obviously the stores are closed today. Something I never understand, why do people have to crowd the grocery stores the day before a holiday, don’t they have anything in their homes to tide them over a couple of days? We could certainly last more than a week without grocery shopping, let alone one or two days. I know people buy special things for a holiday, but do they have to do it on the day before, surely it would be easier to shop earlier?

This morning I was standing, like a kid, with the fridge door open wondering what on earth to have for breakfast. I have to eat a good breakfast in particular because of diabetes so I always start with Fibre 1 cereal with skimmed milk and flax. Then I have whole wheat toast and something. It was the something I couldn’t decide about. I started thinking about the breakfasts I used to have when I was a youngster at home, things like kippers, herrings fried in oatmeal, salt beef, belly of pork etc. etc. Not a waffle in sight, nor would I want one, that is a breakfast habit I have not acquired over here. I actually ended up with a scrambled egg made in the microwave, not bad, but something I eat a lot. Just thought of another one, smoked haddock with a poached egg on top. Yummy. I don’t think these things are eaten very much in England these days either, unless by old folks like me.  I know even Matt tends to turn up his nose at the thought of fish for breakfast and yet he loves fish. Once in a while if I break open a pack of smoked salmon for lunch, I will have some of it for breakfast the next morning. But oh for those kippers, the real ones I mean, properly smoked not stained with some kind of dye. Yes, we did have bacon and eggs too, but usually back bacon, not the streaky bacon which is generally available in North America and of course we would often have lamb’s kidneys fried along with everything else. In fact a Sunday breakfast would often start with kippers and then be followed up by the egg and bacon deal. Ahhh well, scrambled egg it is.

I hear this morning that Larry King is about to retire. I DO NOT LIKE Larry King. I personally will not miss him one bit, not that I ever saw much of him on TV. He did a lot of commenting one Olympics whilst we were in the States and I/we developed an aversion to him which was not erased by anything I saw of him afterwards. 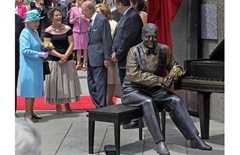 TV, we saw HM the Queen unveiling a statue of Oscar Peterson yesterday. It is really a super statue and very people friendly. This photo is from the Ottawa Citizen  http://tinyurl.com/35erewd Last night it showed people sitting next to the statue and taking photos and Oscar Peterson’s wife was present as well as his daughter and both said it was very like him. Her Majesty is in blue by the way. That reminds me of a pet peeve of mine, particularly in the written word. If you are addressing or referring to a king or queen it is Majesty. Highness refers to a prince or princess NOT their parents.

I had my usual email from Hersheys and picked up a tip I thought was useful, to prevent ice cream from crystalising in your freezer, press some Saran wrap (fling film) down firmly onto the ice cream before replacing the lid. Here’s a very simple sundae recipe from them – bit late for Canada Day but certainly in time for July 4.