In case you missed it in the comments the other day, I goofed about the date of my visit to the Vascular Lab. It wasn't today it was next Monday, the 27th.

My dose of Cannabis increased on Saturday by 50%. Still doesn't seem to be much effect though. One thing I haven't figured out is how I tell when it's almost time to reorder. I can't see into the bottle or anything. Mind you, if nothing is happening by then I won't be re-ordering anyway.

Saturday night I watched a programme about the Roma or Gypsies as they are frequently called, describing what happened to them during the Second World War. After so many years, this is the first I have ever heard of their persecution which was as bad or in some cases worse than that suffered by the Jewish people. What a horrifying story.  The Holocaust involving the Jewish people was bad enough but thousands of Roma went through the same experience. What makes people do this kind of thing and why don't we learn. I recently saw documentaries about that part of the world which, to me, is Yugoslavia, and all the dreadful things which happened there during their wars. Genocide seems to be a popular measure by many people in power.  Many of us hear the news and think "how awful" and then basically forget about it. Man's inhumanity to man.

Saturday supper I made Korean Beef Bulgogi and for some reason I didn't enjoy it one bit. It seemed dry to me, no idea why, made it quite a few times and enjoyed it. So Sunday I made Fried Cabbage with Egg Noodles and chopped up the leftover steak, adding it to the pan, made a big difference and I quite enjoyed it. However, I think the Korean recipe is not something I will be making again.

Here is another egg dish which would fit both the breakfast and supper category again, sounded simple and quite tasty to me. Himself doesn't like sweet potato but I do.

Skip the gluten and get some vitamin C with this healthy sweet potato toast recipe. Topped with 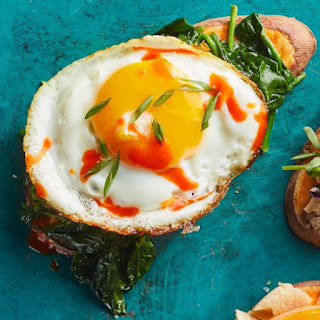 spinach, egg and a dash of hot sauce, it's a delicious alternative to eggs Benedict.

1. Toast sweet potato in a toaster or toaster oven until just cooked through and starting to brown, 12 to 15 minutes. Top with spinach, egg, chives and hot sauce