Doppler Test, King St. and LRT, Food of the Future,

I went for my ultra sound or Doppler test. Didn't turn out to be anything I hadn't had before and from the sound of everything (you hear slurping pulse noises) I don't think it is my veins or blood that is causing my problem. That is my inexpert opinion of course. Whilst waiting to go in for my ultra sound we were reading ads about varicose veins and how they can cause problems which are not just cosmetic. I am wondering, having read these ads, whether this could be part of my problem. I will ask the surgeon when I get to see him. 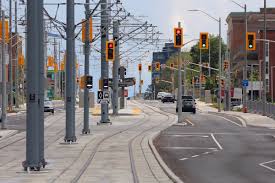 We can, these days, drive up King St. which is part of the Light Rail Transit system which has been installed. The LRT is not yet in operation mind you. However, I dislike using King St. as it has now become virtually single lane so if you get behind a bus or something, that's where you stay. I think this would give you the idea. On the right you will see there are turn sections, but the road you drive on is single car only. That is the dark part. The light part in the middle is the LRT lines. There are also dozens of traffic lights all the way along. What on earth it will be like once the thing is up and running, I dread to think. Having been to the Vascular Lab which is right on King, I have now figured a way of getting there without using King much at all. I suspect some of the stores are feeling the pinch, but maybe it is just me that basically doesn't want to use the street.

Watched the third and last part of Tomorrow's Food, I think it's absolutely fascinating. Matt thinks its garbage!! They now have machines that can print food - same as the ones that print plastics. They demonstrated printing, and then cooking, a pasta shell. There is also a way of taking real meat, removing some of it's components and engineering more meat from it. At the moment a burger made from this meat costs something like $2,000 but they reckon eventually it will be reduced to regular prices. One or two ideas don't involve cooking at all which I would not like, there were shakes which you drink 3 times a day and they constitute your whole meal with all the nutrients you need. They tried it on a group for a week. Some said they didn't feel too bad on it, but nobody said they were likely to continue using it.

This is the recipe I used on Saturday. 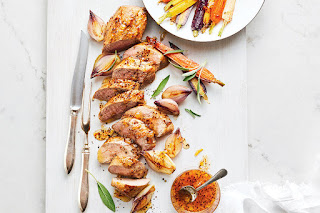 2. Sprinkle pork with remaining salt; rub all over.

3. In cast-iron or ovenproof skillet, heat remaining oil over medium-high heat; cook pork, turning often, until browned, about 5 minutes. Add carrot mixture to pan; roast until instant-read thermometer inserted sideways in centre of pork reads 155°F, about 15 minutes. Transfer pork to cutting board; tent with foil. Let rest for 5 to 10 minutes before slicing.

4. Meanwhile, in small saucepan, stir together marmalade, mustard and sage; cook over medium heat, stirring frequently, until slightly thickened and syrupy, 3 to 5 minutes. Set aside.

Kitchen Technique: Letting the pork rest before adding the marmalade glaze means less glaze will slip off the meat while cooking and stick to the pan.