I backed into someone's car in the parking lot at the bowling alley. I was in a bit of a tizzy at the time and I didn't think it was much so didn't stop. However, having looked at the back of our car which was unmarked, I figured I had better phone the bowling alley and let them know it was me. The woman who owned the car phoned me later and said she would get an estimate. She did so, came to our building and showed me the estimate and the damage. I would have called it minor but not the garage apparently. They wanted $800 including a rental. I said I wanted a second opinion and she said she would talk to her husband. I then phoned my insurance company for advice. Basically they said all she had to do, because we have No Fault insurance here, was to contact her insurance company who would take care of everything and then get in touch with my people. And, as this is my first accident, I have accident forgiveness which means it will not affect our premium although that only works once. Matt was seething.

Pity, rather ruined a good afternoon bowling as I pushed my average up by 4 points and as a team we had won two games before we left.  Our team was standing alone in second place!!!

I had planned to air fry chicken breast for supper and so, in the middle of all this hoo ha with the car, it was getting late so I kind of rushed around and threw everything together. Surprisingly it worked. I had some broccoli which I cooked with it and followed with Strawberries and Cream. Having eaten, and enjoyed it, I can now think of all kinds of other flavourings one could use. But talk about quick and easy. 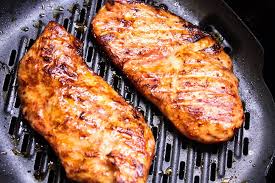 2-4 chicken breasts
2 tbs all purpose flour (I used that much for only 2 breasts)
1 tsp paprika
1 tsp salt
1/2 tsp black pepper
melted butter or cooking oil (I used olive oil) butter might have tasted pretty good, but no time to melt it)

Preheat the air fryer to 400°F. Combine all dry ingredients in a small bowl (I used a plastic bag). Lightly brush the chicken with the melted butter or cooking oil and roll in the mixture of flour and spices. Cook for 8 - 10 minutes, turn them over and cook for an additional 8-10 minutes.