The way my life has been going lately, I thought it must definitely be Mercury Retrograde. In fact that doesn't begin until July 26. First it was the car then Thursday morning I had a really debilitating attack of diarrhea and at the same time my lower legs went totally numb. I already had knee problems for no reason I was aware of and could hardly walk I finally called for an ambulance. On the way to the hospital one of them put an IV into my hand in case they needed to pump something into me, turned out he did it wrong!!!!! So later I had to have another one. The one done in the ambulance was damned painful. Anyway, they are all checking me over when I had to go to the bathroom. What I saw in the pan made me call the nurse, lot of blood. They decided to admit me and give me an endoscopy. Had that done and they didn't find anything, next decision, a colonoscopy, just what I wanted!!!! Everyone has always assured me the preparation is the worst part. I was having terrific trouble feeling warm in the hospital, even Matt had to ask for a warm blanket whilst he was sitting there. Luckily I had my heavy sweater with me (I was still in my nightdress) am I glad I grabbed it on the way out. Once we realised I had to stay the night, I called friends who live within walking distance of the hospital and they took Matt home. I called the garage and said I had no clue as to when we would be picking up the car. He assured me it was fine and he would store it away at night.

I was telling my cleaner that I seem to attract sassy nurses. She assured me that was because I am sassy anyway!! She should know, she is another sassy one.

Friday afternoon I had the pleasure of my first colonoscopy. As I was concerned about Matt and wanting to get home, the surgeon suggested I did without sedation, so I did. Am I nuts or what? I told him I had a double length colon (was told that  40 some years ago) I don't think he believed me, he did by the time he finished. I watched every minute on TV. Yes, it did hurt now and again, but really wasn't too bad. Now I know what my colon looks like, LOL. Got home just before supper on Friday having had little or nothing in the way of food for 2 days. Wasn't feeling like jumping the moon so didn't have our usual Friday night drinks before supper. Basically had Chicken Noodle Soup from a packet and some cheese and crackers. Went to bed early and slept like the proverbial log. I still don't know anything more about my legs. They X-rayed my kneee and said nothing about it. I am going to phone Monday morning and see what I can find out.

Saturday morning, as I described it to the garage, got up feeling like a spring chicken and by 10 ish felt like an old boiler.. I notice a lot of typos in this, please excuse them if I miss them. Later, on Saturday, a neighbour in the building asked me for some photo/PC help which I gave and then, having told her about everything, she took me to the garage to get my car. At least we are mobile again now, if we want to be anyway. I must admit I am still not feeling 100%. Monday afternoon I have to go for a Bone Density test too. Had to put if off once before.

I cooked a Pork Tenderloin Diablo for supper, pretty good dish. I've made it once or twice and it is fairly quick and easy to do as well. A friend told me to take it easy and not try and be chef of the week. Easier said than done, I am a pretty particular eater I guess. I have plans later this week, I hope, to make the following recipe. You must admit it does sound easy.  I remember my mother used to make something similar when I was a kid. Never heard of churns in those days. 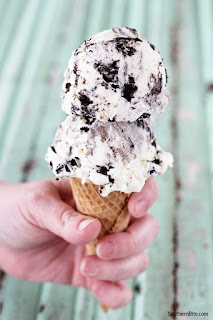 1. In a stand mixer (or in a large bowl with a hand mixer) beat the cream until stiff peaks form. While continuing to beat, slowly add in the vanilla and sweetened condensed milk. Mix until combined. Gently fold in the cookies with a spatula. Transfer the mixture to a freezer safe container with a lid and freeze for at least 4 hours. Scoop and enjoy!