We did go bowling today and I am delighted to report that I bowled well and maintained my average. I was rather surprised as I wasn't feeling 100%.  Not only that our team took all 7 points too. We were in 2nd place when we started, won't know until Thursday where we stand now.

Was talking to a team member who's wife is on medical marijuana. By the sound of it, I won't get any on Monday when I go, I have to have it mailed to me? Seems somewhat odd. So it could take yet another week before I get it.

Just heard a headline about someone drowning in a rip tide at Emerald Isle, NC.  That was almost our back yard when we lived in NC. They had formed human chains pulling people out of the rip currents. I remember being caught in a rip current myself once, on the island of Malta. Very frightening. I learned then that one should always try and swim across and not against. But I didn't know at the time and was very lucky a chain managed to save both me and my friend. Neither my husband of the time nor my friend's wife could swim anyway and it took them a bit to realise we were in trouble.

I have had a bit of a craving for ice cream lately and I have, in the past, made ice cream with frozen bananas, but this sounds a pretty good version.

Ice cream equals summer. But for those that can’t enjoy dairy versions, there’s an extremely healthy solution to satisfy your ice cream cravings.
This vegan peanut butter chocolate chip ice cream uses frozen bananas as its base, creating the smooth and creamy texture of regular ice cream, just without the cream (and calories!). You’ll think 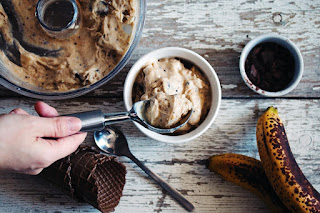 you’ve died and gone to heaven after you try this.

1. Place frozen banana slices in a food processor and run the machine until it resembles a crumb like consistency.

2. Add peanut butter, cacao nibs, sea salt and agave, and whiz a little longer until you get a soft-serve ice cream consistency.

3. Tip: You can add many other things to this frozen banana ice cream base. Try candied nuts, almond butter or another favourite nut butter, cinnamon, frozen blueberries, chopped dates, candied ginger… The options are endless.