Having had a migraine today (Friday) I recalled that we had watched a documentary about them the other day and thought I would remind my self. I went to the Mayo clinic page and reading it many of the symptoms seemed the same as a stroke which made me think how does one know which is which. I didn't know one could get tingling or numbness in one's arm or leg when one is "coming on".  Really didn't know much about them even though I have had them as long as I remember. My mom had them too, she called them sick headaches and had no idea they were migraines. Neither of us had/have ever been treated for them - I just use Tylenol 3 these days, in the UK I took codeine, basically the same thing.

Watching The Great British Bake Show again, I really enjoy that show. I wouldn't like to take part though, I am not a baker per se. One of the challenges tonight was to make a several layered meringue cake with fillings. What I would call a Pavlova and not sure why they didn't. I have actually done that, many years ago now, but I built a tall basket of meringue and then filled it with whipped cream and fruits etc. Much the same as I do with the Pavolva rings I buy these days. I also discovered there were three different types of meringue, French, Swiss and Italian. The Italian looks like the easiest to me. I must remember that in future.

I made my filling for the Egg Rolls today but must admit I think it needs some salt. The recipe calls for soy sauce, but I don't think that's enough. Will see what I feel tomorrow when I make the actual rolls. For our Friday supper I made Shrimp Creole which I haven't made for a long time. My recipe is a combination of recipes I have used over the years so can't attribute it to any source in particular. By the way, it is pronounced as a cross between Wuster and Wooster Sauce. Non Brits seem to have a problem with that. I actually came across a recipe the other day where the ingredient was typed as Worchester - shudders. 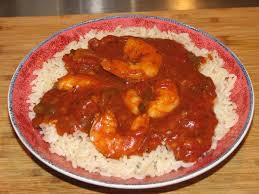